“I have not spent one dollar on medicines or follow-up procedures in my 14 years post-proton treatment. I have friends and colleagues that have had other modes of prostate cancer treatment and they all had follow-up treatments with much expense and physical problems.”

Through the Grace of God I found Loma Linda University Cancer Center’s proton treatment for my prostate cancer. Additionally, I feel it was was Divine guidance that had me delay other “recommended” treatments prior to my proton decision.

I received 40 proton treatments at LLUCC from May through July 2002.

In 1995, I had my first PSA check at age 52 - it was 4.5. Had a negative 6-snip biopsy and a year later the PSA was 5.7. Each year my PSA rose about 1.2 until March, 2000 it hit 10.5. During those five years my urologist treated me for prostatitis, performed another (negative) biopsy, and suddenly closed up shop and left town.

My records sat on my desk for six months while I looked for another urologist. The new urologist did a (third) biopsy. Laboratory tests showed 7 of 13 samples positive for “technical-termed” carcinomas. Gleason score 6/7, T2A. I wasn’t convinced the test was correct and went for a second and a third opinion. Then I read about Maitake mushroom supplements and took them faithfully for four months. For the first time in years my PSA fell (from 10.5 to 8.5 and back to 9.5).

I kept delaying all the “recommended” treatments for prostate cancer because they all had frightening side effects.

I thought I had searched the Web so much, but still hadn't found anything that seemed manageable. What was I looking for?

Then I talked to a friend who had surgery for prostate cancerl; another who had seeds; and a third who had cyrosurgery. They all had problems from their treatment - some were severe. All of them, however, said, "Do what I did - at least I can golf!" I wanted to do more than golf!

During the year and a half of delays and "foot-dragging" there were so many “coincidences” that post-poned my prostate cancer treatment ... they would fill pages if I went through them all. I was literally three days from signing up for seed placement when an old friend of the family dropped a note in my mailbox. His son was an old 1980’s calculus student of mine. He had a friend whose father had prostate cancer and had received something called proton therapy at a place called Loma Linda University Cancer Center in California. The note in my mailbox? It contained a Web address: www.protons.com

So, I am extremely grateful for the "mushroom supplements delay," the old-urologist-leaving-town delay, the second and third opinions delay, the many appointments with both WVU and Pittsburgh urologists and radiation oncologists delay; and I'm especially grateful for that note in my mailbox that came just at the right time.

These days, I’m thankful most of all for LLUCC and proton therapy. I could write another page on the excellent treatment and care I received from my doctor and the staff at Loma Linda. The Gantry III crew could not have been more professional and competent. What a positive experience I had!

Interestingly, my last proton treatment was a Friday around 7:00 p.m. I took the red-eye out of Ontario, California Airport and got into Pittsburgh around 1:00 p.m. on Saturday (time zones and layover). I rested Sunday and set out Monday morning putting in 14 hour days, six days-a-week for four weeks baling about 100 acres of heavy Pennsylvania hay.

I can’t complain about recovery time. I was blessed with the best prostate cancer treatment in the world.

I was treated at LLUCC in 2002. At the time, my PSA and other scores were high.

My proton treatment was trouble-free (no muss, no fuss, no blood, no meds ... not even an aspirin). Thirteen years hence, here in 2015, at age 71, my yearly PSA check-up is low and steady.  I currently bale and physically handle about 13,000 bales of hay a year as well as many horses in a three-county area.

The best part of the proton treatment is that it is "one and done."  have not spent one dollar on medicines or follow-up procedures in my 13 years post-proton treatment. I have friends and colleagues that have had other modes of prostate cancer treatment and they all had follow-up treatments with much expense and physical problems. I'm very glad that I did not listen to the MDs in my area who pushed other treatments; I'm glad I did my own research on all PCa treatment options; and I'm glad I found proton therapy and Loma Linda University Cancer Center.

Below is a photo of Wayne on his tractor. 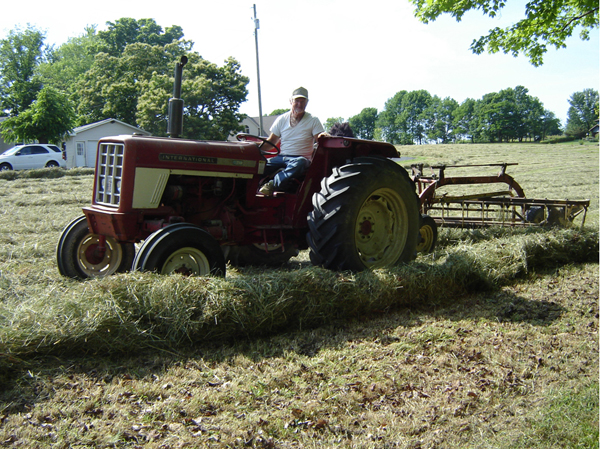 My quote above still holds true: "I have not spent one dollar on medicines or follow-up procedures in my 14 years post-proton treatment."

Before my proton prostate cancer cure, I witnessed four other members of my faculty that had other types of prostate cancer treatments (two had surgery, one seeds, and one cyro) and they all had follow up procedures and/or medications and problems. They are ruined for life. I, on the other hand, am like a kid again (well, almost).

Below is a photo of Wayne on one of his collector tractors, a 1977 winning the barrel-roll competition at an antique tractor show. 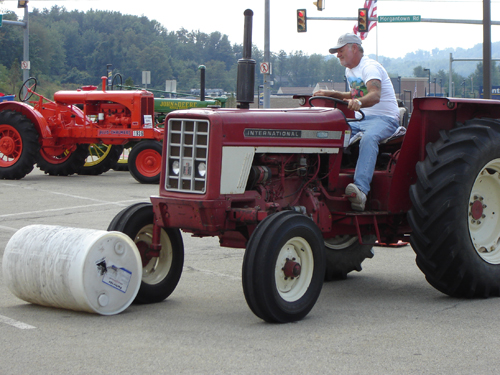 I don't refer to it as proton treatment - I call it the proton cure.