The following was originally posted in 2001 nine years after Warren Johns was treated with protons at Loma Linda. The last paragraph is an update as of March 2008, a full 15 years after his proton therapy for prostate cancer.

"I wish I had better news but the biopsy shows two or three malignant spots."

Like thousand of guys before, I heard the urologist's diagnosis. It was not just another day at the beach. An earlier PSA test registered 5.9, hoisting a red flag. Reality loomed front and center: prostate cancer had invaded my 63-year-old body.

The physician's words flowed, resonating reassurance. The seasoned practitioner understood the drill. "Don't lose any sleep. After you return home, drop by at your earliest convenience and we'll look at your options."

It was early December 1992 - not the Christmas season taken for granted.

Celebrating recent retirement from law practice, my wife, Ruthie, and I had taken the train to New York City in a "jingle bells" mood to saunter along bustling 5th Avenue and to inhale Manhattan's zest. Now, immersed in the subtle din of Penn Station, waiting to board the Maryland bound train, I remembered to telephone my Silver Spring urologist. Feeling refreshed and macho healthy, like most aging men, I expected the ritual clean bill of health.

It was not to be!

The wake-up call seemed surreal, like something out of a movie. But it didn't startle or unleash waves of consternation. After all, prostate cancer ranks as a slow grower, somewhere around 200th on the "Richter Scale" list of deadly cancers. Still, lightning fast or plodding slow, it could kill. By the time I stepped off the train at the BWI depot, I had rejected all thought of so-called "watchful waiting" and determined to explore every scintilla of evidence that might lead to an informed choice.

Alert to the family history, my internist mandated a PSA test as an integral part of the annual physical---three years running. The summer of my retirement it showed 4.2---a number the doc rated "high normal." Wisely he required a follow up three months later. The PSA had crept up to 5.9.

Thanks to this early alarm, the urologist did the biopsy. A fury of other tests followed. Gleasons checked out at 1+2=3. The diagnosis left not doubt: prostate cancer, in the early stages, had invaded my body. The remaining issue: how to respond. My wife and kids mounted a positive, supportive chorus of "get on with it…now!!!"

Just a stone's throw away, the prestigious Johns Hopkins offered a cadre of great professionals. Dr. Patrick Walsh, renowned innovator of "nerve sparing" surgical technique, headed the team specializing in prostate surgeries. I bundled the records and sought consultation in Baltimore. Surgery suggested the advantage of taking out infected lymph nodes; it also carried a range of risks.

So the search for options continued.

Radiation; cryo-surgery; radioactive seeds…etc. Each procedure carried risks of its own. It's amazing that such a miniscule component of every man's anatomy could play such a pivotal role in the quality of life, all the while possessing a lurking potential to wreak havoc. It also amazed how few in the medical professions (circa 1992-93) acknowledged awareness of the emerging proton beam therapy, a cutting edge protocol available on the west coast.

The concept first came to my attention by lucky coincidence.

In the 1980's I had been invited to sit informally, as a consulting lawyer, a guest of the Board of Trustees of Loma Linda University Medical Center. The turf embracing "hill beautiful" generated flashes of a once upon a time. I grew up in the town. As a teenager, I earned my spurs, working for the old "Sanitarium and Hospital" on the hill before heading out to college and the rest of my life.

First I raked leaves and mowed lawns as the youngest member of the "grounds crew." Next I tried my skills in the kitchen, washing dishes and carrying patient trays. Finally, I joined the ranks of the elite "call boy" crew. We strutted in spiffy, gabardine uniforms sporting brass buttons, feeling ten-feet tall. As glorified gofers we carried suitcases; pushed wheel chairs; and occasionally operated the elevator. Hotel-style tipping was forbidden.

Another guest of the Board, a distinguished Chicago representative of the famed Fermi Lab, appeared that same day to explain atomic energy's potential contribution to medical technology. He proposed construction of a linear accelerator designed to generate a proton beam that could attack invasive, cancerous cells with microscopic precision.

The concept intrigued. It promised the power of radiation without the bane of traditional radiation treatments---collateral damage to healthy tissue.

The break-through scientific technique sounded terrific---but to a layman watching the action, it looked like the hospital would be betting the proverbial farm to underwrite the project---estimated construction costs eventually pushed to $60 million by the time all three gantries were operational.

Fortunately for the world, my personal hesitancy had no vote, and Dr. James Slater's visionary wisdom carried the day. In a strange quirk of footnote history, both the scientist from Fermi and myself became early beneficiaries of the proton beam protocol. With only a single gantry operational in the winter of 1993, I showed on the scene in time to be the 500th patient.

During the course of treatment, sidelights surfaced. Stuffy, male patients inevitably shed false dignity as bodies were poked, prodded and radiated. One attendant told me of an elderly gent who complained, wondering if he were being cheated because he never felt pain during treatment.

The devoted loyalty of my wife, Ruthie, impressed all comers.

In the finest tradition of her old south culture, she supported me emotionally while waiting patiently in the reception area during the course of all 37 treatments. And thanks to her outgoing warmth, we met a string of other guys, and their spouses, pioneers encountering the "brotherhood of the balloon." We still keep in touch with our good friends, Chuck and Yvonne Smith of Burbank.

Today, all three gantries run at or near maximum capacity. Former patients now number in the thousands. Most of us who relished the sights and sounds of Southern Cal's storied tourist destinations during those two month sojourns, carry happy memories. In particular, we treasure the professional oversight lavished on us by the dedicated staff. The consistent touch of loving care exemplified Loma Linda's motto "to make man whole," in the tradition of the Great Physician.

Nine years have passed since exposure to the penetrating power of the proton and the superb medical skills of the "beam team."

I'm a lucky guy. I'm alive and well. I play golf with other old timers. As a first baseman in an old man's slow pitch softball league I've learned to accept the fact that perhaps I never possessed the major league potential once envisioned confidently in my teenage mind. And every year, when my annual physical rolls around, Johns Hopkins routinely checks my PSA. It never spikes higher than 0.2 and side-effects have been minimal.

Like Bob Marckini, dynamic founder of BOB (Brotherhood of the Balloon), a chunk of my quality time focuses on projects intended to enlighten and enhance the lives of others. I've discovered the joy of exploring the mysteries of pre-history and the origin of the miracle of life on Planet Earth. (If you're interested in my views, you can spot them on my website: www.CreationDigest.com. You should be warned ahead of time---I'm not a fan of Charles Darwin and his rather quaint speculations).

Each day is a treasure, offering moments to thank God for the privilege of living in this fabulous nation of freedom while embracing the opportunity to pursue truth and to speak openly. All this plus the bonus benefit of access to 21st century health care.

I only wish my granddad, John Herbert, could have been so lucky!

Update March 2008: We spoke with Warren in March 2008. He now lives in Smithville, Tennessee. He tells us his PSA dropped to 0.2 after treatment and has remained there ever since. Warren has authored a book, Beyond Forever, a lawyer's look at evolution flaws; he is no longer affiliated with the CreationDigest website; he is now owner and editor of www.SmithvilleTODAY.COM; and, he says, "The quality of my life is excellent."

We spoke with Warren in August, 2012. He still lives in Smithville, Tennessee and has purchased a winter home in Banning, California. He tells us his PSA dropped to 0.2 after treatment and has remained there ever since. Warren has authored another book, Three Days Before the Sun, a lawyer's look at evolution flaws; he owns and edits www.GenesisFile.com - an overview of the origins issue. In addition to five grandchildren, he is the proud great-grandfather to three great-grandchildren. Nearly 20 years after treatment at LLUMC, he reports "The quality of my life continues to be excellent."

"I continue to enjoy remarkable health for an 83-year-old guy. It's been 20 years since my prostate cancer diagnosis and my PSA continues to hover around 0.2. I'm convinced that people like you who devote their lives to the service of mankind, enjoy a peace of mind and an enhanced system of immunity, compliments of our Creator."

Recently, on the eve of my 86th birthday, I attended the law school graduation of my grandson Bruce at McGeroge School of Law in Sacramento. Pictured below is Bru with his newly minted JD and my great granddaughter Eliza with "the old guy" in front of Memorial Auditorium. 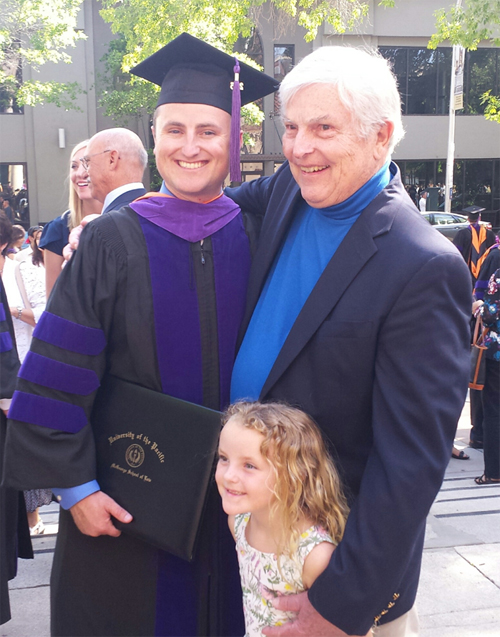 "In the most recent BOB newsletter, Bob Marckini gave a lot of credit for the success of proton therapy to a wide range of deserving people, starting with Dr. James Slater at LLUCC. But you, my friend Bob, have provided leadership skills that money can’t buy. Loma Linda University Cancer Center is blessed by your Christian devotion, professional skills, and consistent commitment to 'making man whole.' I’m proud to know you and pause to salute a true, lifetime champion for all things good.” - Warren L. Johns

Warren is doing well, feeling well, and staying busy. He is currently writing a book, "The New Creation."

"The book whacks away at Charles Darwin’s flawed thinking, but this title does more—several chapters are devoted to the 'Making Man Whole' mantra and the unique role played by Loma Linda University Cancer Center. Naturally it includes a few words about the proton beam protocol and mentions Bob Marckini and Deb Hickey as key role players." - Warren L. Johns