"I had absolutely no pain during the 41 treatments of proton — in fact, I played golf and swam at the beach during my treatment."

In December, 2007 my VA Dr. advised me my PSA score had almost doubled in one year and she advised me to follow-up with a urologist. I was fortunate to have Dr. Blitz, a local urologist, take me as a patient. He performed a biopsy and confirmed I had cancer and it was moderately aggressive. Although he is a surgeon, he did not recommend surgery for me in deference to my 74 years of age. He suggested I visit with an oncologist and radiation specialist (I did), research treatments, and when I had decided what I wanted to do, to advise him. His support and approach I later learned was outstanding compared to the absolute horror stories I heard of the poor parochial attitudes my fellow patients at Jacksonville had received from their doctors.

After a visit with the oncologist/radiation specialist and a thorough Internet search, Bob Marckini's book, "You Can Beat Prostate Cancer," and review of all the information then available that I could find, I fortunately chose proton beam radiation therapy and so advised Dr. Blitz. His reaction was, "Fine—if that is your choice," and offered to do any follow-up I might want or need. To this day he continues to follow-up and offer me support as I have gone through these now three years.

My latest PSA is .2 and continuing its downward trend. All my plumbing works, including sexual function (albeit at my age a little less vigorously and I can't really say if it had anything to do with the proton therapy or just normal aging). I had absolutely no pain during the 41 treatments of proton — in fact, I played golf and swam at the beach during my treatment. I took Flomax briefly the last few weeks of the treatments and for a couple of weeks thereafter and then no longer needed it. 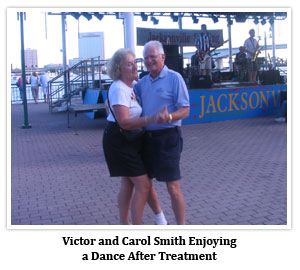 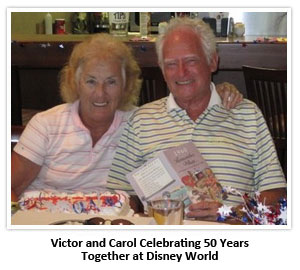 All in all, I am reminded of a comment one of my fellow patients made, at the end of his treatments, at a luncheon meeting at the Proton Therapy Institute in Jacksonville, where I received outstanding caring and attentive treatment. "Sometimes I think this whole thing is a scam...because I have felt nothing!" This brought a very long and happy roar of laughter from all present.

I have had the opportunity to advise and counsel several acquaintances who found themselves as I did with the problem. I always recommend Bob Marckini's book and the Brotherhood of the Balloon website. I know they have contacted PTI and one has now completed his treatment.

I certainly hope this will influence others in successful treatments.

Note from Deb Hickey: Weeks after Victor submitted the above testimonial, he and his wife went on a three week tour of China and Tibet which included a thousand foot climb from Lhasa to the Potala Palace at 12,500 feet. What a way to enjoy life after treatment!