"...it was a "no brainer" as to which treatment I would have - proton therapy of course!"

I registered to be a member of the Brotherhood of the Balloon in early November, 2010, because I was going to begin proton therapy for prostate cancer in mid-November at the University of Florida Proton Therapy Center in Jacksonville.

I have to give a lot of credit to one of the previous patients of proton therapy at Loma Linda - Alan Schmidt, of Cincinnati, Ohio - for pointing out to me proton therapy as an option after I was diagnosed with prostate cancer in August, 2010. My boss referred me to Alan (a close friend of his) after I told him of my diagnosis. Alan was not "preachy or pushy," he just gave me information and told me about his positive proton experience. He also sent me a copy of Bob Marckini's book, "You Can Beat Prostate Cancer."

I did my due diligence in researching treatments including surgery, conventional radiation, and seed implantation. I made the decision to go with proton therapy after consultations with doctors in Orlando, Florida that offered the other treatments. I have to say that none of the doctors were negative about proton therapy; they just told me they had no first hand experience with it. They said proton therapy was definitely a viable treatment.

I cannot say enough about my whole experience thus far at UFPTI. It has been the most positive experience I have ever had with the medical establishment (and I'm 63 years old). The intake process was quick and efficient (they got confirmation of payment with my insurance company within 24 hours of me faxing them the details). They have a great staff and an excellent support infrastructure.

I have been telling friends and relatives about my positive experience, and I hope to be able to help others in the future. I have also been encouraging all my male friends to get PSA and DRE regularly, because that is how my prostate cancer was caught early. I had been getting annual DREs, and twice a year PSA readings, since a severe bout of prostatitis in 1998 at the age of 51. So in August, 2010, after 6 months of elevated PSA subsequent to another bad case of prostatitis, the biopsy tested positive: 1 positive sample out of 12 with a Gleason score of 6.

Below is a photo on me and my motorcycle. I rode it on weekends during my treatments (since I was in Jacksonville at the Proton Center during the week and home in Orlando on weekends). I ride it just about every day to work (50 miles round trip) and I'm planning a few trips later this year. I generally put 15,000 miles on the bike each year.

I also wanted to share that the great support of my wife, Pat, was instrumental during my treatment. She was really helpful in making initial contact at UFPTI and was positive and supportive throughout my treatment. She was especially positive about my insurance paying for the treatment (which it did). I actually faxed my initial paperwork to the folks at the proton center at 8am and they got confirmation and agreement from my insurance company to pay for the treatment by noon the same day. At that point it was a "no brainer" as to which treatment I would have - proton therapy of course! 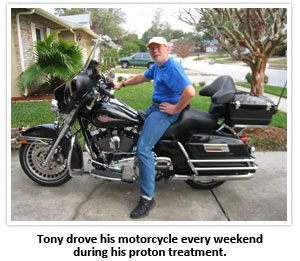