This is a story written by Thom Chase’s wife, Jeannie. Prostate cancer is a couple’s disease, and Jeannie does a terrific job sharing the experience of diagnosis and Proton treatment from the perspective of the patient’s wife.

On Wednesday, February 12, 2003, my husband, Thom Chase, found out that the latest in a series of three prostate biopsies was positive for prostate cancer. While this wasn't a total surprise to either of us, it was certainly a shock. Thom's father had prostate cancer as well, but unfortunately passed away after surgery when he developed congestive heart failure. He never left the hospital after prostate surgery. Thom has had his PSA monitored for several years. Each test showed higher than normal levels. This was his third biopsy and this one was positive. This was also not his first round with cancer. Thom had thyroid cancer several years back and was successfully treated for that. Exposure to Agent Orange in Viet Nam most likely contributed to cancer development.

When we received the diagnoses of prostate cancer, we began our search by looking for the best facility and physician for surgical treatment. No one mentioned Loma Linda or proton treatment. Thom found that on the Internet. He spoke with Bob Marckini and several men who had gone through various treatments. We decided that proton was the best treatment available that offered extremely good outcomes with minimal side effects. Thom was then 56, and incontinence and impotence didn't seem like much of a life style. Our life style includes living full time on our boat, cruising when we can, as well as Thom's profession, which is a helicopter pilot for The Port Authority of NY/NJ. We weren't willing to alter our lives, give up our dreams, or limit ourselves. As well, the specter of his Dad's death was always with us. We put our floating home up on land, packed up, and drove cross-country with our cat.

We spent two full months in Loma Linda, renting a furnished apartment. Loma Linda University Medical Center is very good about helping you with any arrangements you need. It's true we were "uprooted" for a time, and he went to treatment Monday through Friday, but truthfully, it is a small price to pay for your health. The people out there are incredible. Never as long as I live will I forget their care for people in all kinds of need. It is inspiring, uplifting and contagious. We've made friendships that will last a lifetime. Treatment itself lasts about 20 minutes each day, with the majority of it used for proper positioning, and the actual use of proton beam lasts about 90 seconds. Thom experienced some fatigue, some burning on urination, but all of that was very treatable and didn't stop us from having a terrific time. After treatment we went sightseeing, did some walking, ate out at too many good restaurants . . . we saw so many things in that part of the country. It was truly like a vacation.

I must mention the waiting room. The patients who are waiting for their treatment have the use of a very large, very comfortable room. There are computers for your use, puzzles to play around with, but the most important and best part of the waiting room was the laughter. We all talked to each other, shared laughs over some of the more intimate details of treatment, planned dinners, told stories about families . . . but laughter was the biggest part and I will never forget having to remind myself that we were all there for cancer treatment, not for planning dinners! There is a separate women's group, the "Pod Partner's", who meet weekly and provide much needed support. A weekly proton patient education meeting is held on Wednesday nights. More than 100 "newbies", "balloonists" and "graduates" attend each week, munching vegetarian tuna sandwiches and chocolate chip cookies, while sharing their stories.

Technical details can be found on the LLUMC web site and on www.protonbob.com. I wanted to share the more "human" side, the couple side, and the "significant other" side of it. Yes, there are a few patients for whom the treatment is not successful, but even they seem to feel they chose the best treatment. And patients feel the success rate is as good as, or better than conventional treatment. It's not "California voodoo and hoodoo". Loma Linda has succeeded in treating some cancers, where other facilities have told patients to "get their affairs in order". As a side note, I was extremely surprised and impressed by the number of physicians, chemists, PhD's in all types of research areas who were there for proton treatment. Biologists, chemical engineers, astronomers, CEO's, cops...these were smart people who had a lot of inside knowledge of beams and stuff I still don't understand.

The partners of the men going through proton treatment are so important to their recovery. My feelings of concern, loneliness, anger, frustration were much easier to handle because of the love and support we received at LLUMC. Knowing that Thom was in the best treatment possible with the best possible people looking after him made it easier for us to handle other emotional issues. We knew we would come through this. And we have. His PSA, measured 4 months post treatment, was 1.2 We have survived cancer as a couple, and are closer and more important to each other than ever before

If anyone has any questions or wants to be in touch with someone who went through treatment as the "significant other", please feel free to email me at jeancatherine42@yahoo.com, or call me at 908-601-2694.

Thom passed away from brain cancer - glioblastoma multiforme grade 4, the most aggressive form you can get, on May 5, 2010. His brain cancer was a primary site and in no way related to his prostate cancer. He fought hard for 18 months. It has recently come to me that Thom has a wonderful legacy to share with anyone diagnosed with prostate cancer. Have proton treatment! You never know what your future holds.

Because Thom had proton treatment in 2003, his 5 years before being diagnosed with brain cancer in 2008 were free of any health issues. He had no side effects, no incontinence, no impotence, and no psychological problems that can result from those issues. We were able to fully enjoy our wonderful live-aboard boat, spent a fabulous summer moored at Sag Harbor, went to weddings, he was able to see me through the deaths of both my mother and father and helped me through a total shoulder replacement.

We moved to Florida—his lifelong dream—and he was on the Board of Directors at our condo association. We went to the beach, concerts, plays, entertained friends and family, he obtained his boat captain's license, enjoyed numerous sunsets, and lived life on his terms. Until his retirement in 2006, Thom continued to fly helicopters for the Port Authority of NY and NJ Police. I never quite figured out which he loved most—flying or boating. The point is—he was able to do it all. And when he wasn't doing all of these things, he spent his time advocating for proton treatment and supporting the St. Joseph's Indian School for Sioux/Lakota children in South Dakota.

If you are reading this and trying to decide if proton is for you, consider what type of quality of life you want for the rest of your life. No one knows what's next—we sure didn't. You owe it to yourself and to those who love you to safeguard your quality of life. Surgery will not do that….proton will.

As Thom would always say, "Blue skies and calm seas…" 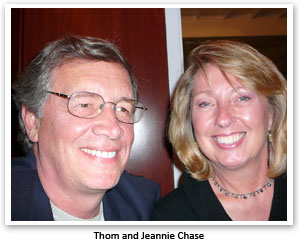