"The medical assistant asked me if I had any side effects [at my urologist appointment 4 months post-treatment], incontinence, etc. I told her I had none. I asked her how many patients at 4 months that had either surgery or conventional radiation also told her that they had no side effects from treatment. She said none."

When I was diagnosed with prostate cancer in January 2012 at age 56, PSA 8.4, Gleason scores 6 and 7, less than 2 years after retiring, my wife told a neighbor that I had cancer. The neighbor said "I have a book Scott needs to read" which was Bob Markini's book, "You Can Beat Prostate Cancer: And You Don't Need Surgery To Do It." Bob's book helped me to make one of the most important decisions of my life. My urologist told me my options, I told him I was interested in protons and told him about my research, which was extensive, and his response was " You need to meet with Loma Linda before you make any decisions to be sure you make the right decision" which I did. After presenting my urologist with all the data and research I had gathered after my meeting with LLUCC, my urologist said if he were me he'd choose protons.

Within 2 months of diagnosis insurance issues with my HMO had been worked out, God opened the doors necessary to allow me proton treatment at LLUCC. I began treatment in March 2012, and even then was still not sure if protons had been a better choice than surgery. My second day at Loma Linda I met a patient that had his prostate removed 16 months prior, within 7 months his PSA began to rise and his cancer returned. He was undergoing 39 proton treatments to kill the cancer the surgery had left behind. He told me that the nationally known medical center (not LLUCC) that did his surgery told him when his cancer came back that this happens with 30% of surgery patients. At that point it was clear LLUCC's proton treatment was clearly the best option I could have chosen.

During my 9 weeks of treatment I continued to exercise at the gym 4 days a week, painted a house, rode my Harley 2000 miles, did many other physical things, and the only side effects I had were some urinary urgency and frequency, both of which disappeared within 4 weeks of completion of treatment. I had no fatigue, no pain, no side effects other than the minor urinary issues, and now 6 months after treatment continue to have absolutely no side effects from the protons.

I met with my urologist at 4 months post treatment for my first follow up, my PSA dropped from 8.4 to 1.0, almost an 89% drop. The urologist's medical assistant asked me prior to seeing the doctor if I had any side effects, incontinence, etc. I told her I had none, and I asked her how many patients at 4 months that had either surgery or conventional radiation also told her they had no side effects. She said "none".

The photo below was taken at the end of Scott's proton treatment in May, 2012 - with the "gantry crew."Scott is pictured far right. 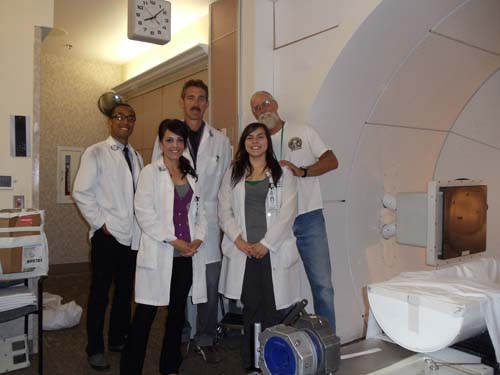 The staff at LLUCC, receptionists, technicians, doctors, nurses, nutritionists, and especially Dr. Martell, D.Min, Director of Special Services at Loma Linda University Health, were the best medical professionals I have ever had the privilege of being treated by. There is no doubt that God is at work at Loma Linda. Miracles are occurring there. With few exceptions, the patients treated by LLUCC will state that it was one of the best experiences of their lives, and many continue after leaving LLUCC to try to help make other prostate cancer patients aware of protons whenever possible. I have since spoken about proton treatment to senior groups, the local prostate cancer support group, many individuals, and I support both the BOB and LLUCC in any way I can, and give my unreserved recommendation for LLUCC's proton treatment program.

It has been two years since I was diagnosed with Gleason 7 prostate cancer. My pre-treatment PSA has dropped 94%, from 8.66 to 0.5, and should continue to drop even lower before reaching nadir. Since my proton treatment at LLUCC, I have become involved in prostate cancer support groups and continue to see a high percentage of the men that underwent surgical prostate removal have their cancer recur and require salvage radiation and hormones, as well as experience incontinence and impotence. I have had no side effects or problems as a result of proton treatment. My quality of life is as good as before treatment in all respects. There is no doubt that I chose the best treatment option in my case, and would encourage all men to consider protons in order to maintain their quality of life and eliminate their cancer.

LLUCC saved my life and they gave me a passion to give back as a result. I will continue to do what I do (help others find their way to proton therapy) for as long as I can.

The photo below shows Scott's many interests. He enjoys everything from halibut fishing to hiking in the mountains. He also enjoys hunting, riding his Harley Davidson, and driving his Ferrari. 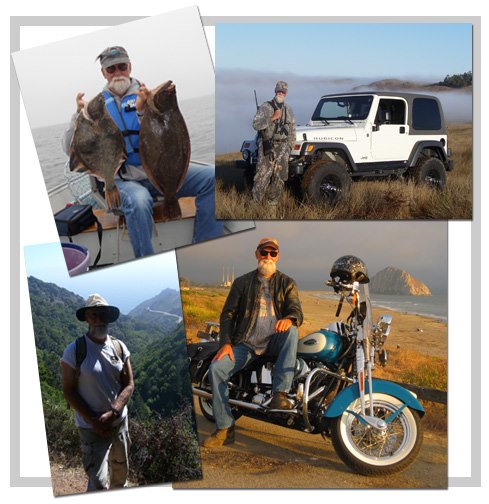