"It's not tragic to have cancer - the tragedy is not knowing what your best approach to treating it is - especially if it's a decision you'll be living with for the next 50 years."

When I found out I had prostate cancer, I resolved to find the right treatment option for my way of life. Ultimately, my choice was proton therapy.

A high-achieving, high-energy sales executive whose passions include triathlons and bass fishing, I was 50 years old when I was diagnosed in August 2011. Guys like me think—I've got another 50 years here on the earth and I want to make sure I know what's going on. With my wife, Sharon, we committed to learn everything we could to make an informed decision and not wait too long to do it.

A routine check-up had uncovered a rising PSA; my follow-on biopsy revealed a Gleason Score of 6 (That's basically a non-aggressive Gleason Score). The good news was that my cancer was in the early stages and still contained within his prostate. The unanswered question was where to go from there. My doctor encouraged me to investigate a number of different treatment options. He said, "There's really not just one answer that I can give you." Instead, he recommended several different physicians to talk to.

My prostate cancer journey was like participating in a triathlon made up of three demanding pursuits, each challenging in its own right: diagnosis, discovery, and treatment. The first step, the diagnosis step, was excruciating. You're told you have cancer and there's a whole cycle of fear, uncertainty, and doubt. What am I going to do next?

Then you get to that next stage, which is research and discovery.

The first oncologist that Sharon and I met with was a surgeon who told me I was a great candidate for a radical prostatectomy. However, after researching this procedure, I was concerned about the long-term impact of living without a prostate, particularly the potential it posed for impotence and incontinence. It just did not look good for my quality of life for the next 30 or 40 years.

We consulted with other oncologists and investigated a number of different treatment approaches, including: brachytherapy, which involves the placement of radioactive cancer-killing seeds in the prostate; conventional IMRT (intensity- modulated radiation therapy); and cryotherapy, a process that freezes tissues within the prostate. With each treatment choice, the related side effects remained a concern for me.

Throughout this whole discussion, the lingering question was—Do I really need to do anything? What if I just wait and monitor this? I considered that; in fact I asked that of every physician we met with. I decided that a watchful waiting approach was too great a risk, since it could result in the spread of his cancer.

By chance, while still in search of an answer, I learned about proton therapy treatment for prostate cancer. We hadn't yet told anyone that I had this diagnosis. But when Sharon told her friend what we were going through, her friend told her, "Don't let Pat do anything until he talks to my dad."

Sharon's friend's father is a prostate cancer survivor who had been treated with proton therapy at Loma Linda University Medical Center in Southern California. We met with him and when he shared his experiences—as well as his exploration and due diligence prior to choosing this treatment (he had spoken with 100 former proton patients before choosing proton therapy!)—I was convinced that it was the best thing for me, too.

Sharon and I prayed about it and then we had a Web conference call with my whole family. I explained what was going on, the research we had done, and I told them, "In all probability I'm going to be going down to California for nine weeks to get this taken care of. I'm optimistic that when I get back I will be back at 100 percent, I won't have lingering long-term side effects and I'll be doing the things I did before I left."

And that's exactly what happened.

Beginning in early October 2011, I embarked upon the third leg of my cancer triathlon, undergoing proton therapy at Loma Linda University Medical Center five days a week for nine weeks.

I was determined to stay with my normal life routine. I experienced minimal side effects. I actually worked full-time while I was down there. I set up a Web conference protocol where I'd meet with my team every morning by Web cam and I'd have my regular one-on-one meetings as well. The radiation takes a little bit out of you, and you don't feel the same energy level that you normally would. Nonetheless, I ran every morning and also biked, swam at the local health center, and lifted weights. They encouraged me to work out daily.

In fact, during my course of treatment, I competed in the Fearless Triathlon in San Diego. It was after my 14th treatment. This was a sprint distance—a salt-water swim, the bike ride was in a closed course, and the run was relatively short. So you know, not a big deal physically—but a big deal for me mentally. While undergoing treatment, I also flew back to the Northwest for a weekend to compete in a bass fishing tournament.

Side effects and life after cancer

Mentally, this cancer journey is a big deal—you come to grips with your own mortality, and what's also important is that the people around you come to grips with that, too. They get strength from the strength that you have. One of the things that has changed since I returned is my perspective on things—on what's important, and giving back, and helping other patients who are going through this process.

I have experienced virtually no side effects from my proton therapy treatment. My most recent PSA test came back with a result that was amazingly low. When I returned home to Sammamish in December 2011, I made a goal of to complete an Iron Man 70.3 race—a half Iron Man—within one year of my diagnosis. I completed the Lake Stevens Iron Man 70.3 on July 15, 2012 (A "half" is comprised of a 1.2-mile swim, 56-mile bike course, and 13.1-mile run.).

My prostate cancer treatment hasn't impacted my health and it hasn't impacted my intensity. It's not tragic to have cancer—the tragedy is not knowing what your best approach to treating it is. Especially if it's a decision you'll be living with for the next 50 years. 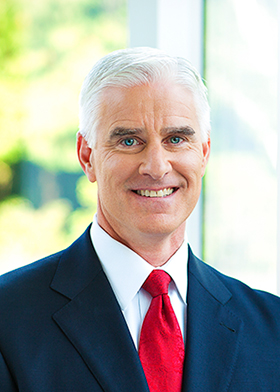 2016 marks the five year anniversary of my diagnosis and successful treatment for prostate cancer at LLUH’s James M. Slater Proton Treatment & Research Center. I thank the Good Lord every day for my continued great health and for placing LLUH in my life. Bob Marckini’s book was the catalyst that helped guide me to Loma Linda and the gifted medical team at LLUH created a wonderful patient experience.  Dr. Lynn Martell routinely tells patients that "faith, family and friends help get you through the cancer journey" - and I would add, "it is always nice to have an angel by your side!". My angel was my amazing wife, Sharon.

My quality of life during treatment was benchmark. I ran, cycled, swam and lifted weights during my 9-week proton therapy protocol and competed in a San Diego sprint distance triathlon following my 14th treatment. I also used technology to work remotely and lead a sales organization full-time. Since concluding my treatment in December of 2011, I have experienced virtually no long-term side effects from the treatment and have exhibited excellent health.  I have continued to participate in sprint distance triathlons and successfully completed the grueling 140.6 mile IronMan Canada triathlon in July of 2014. Thank you LLUH for saving my life and preserving my quality of life.

Pat is featured in an inspiring new video. Follow Pat and his wife, Sharon, through Pat's prostate cancer diagnosis, proton treatment, and life after treatment.