“Loma Linda has changed me from a cancer victim to a cancer survivor, from a person filled with fear of death to a person joyfully celebrating life - past, present and future . . .”

Below is Pastor Agnir's graduation speech from January 8, 2003:

As some of you have heard me tell it, I first found out about Loma Linda through the Internet from (BOB member) Joe Namiotka of St. Augustine, Florida in answer to my blind query to a European prostate cancer email list about what they would do if they were in my place. I still remember distinctly how he introduced himself. He said, "My name is Joe Namiotka and I graduated from the Loma Linda proton beam radiotherapy protocol in September 2001." There were two words from his introductory remark that intrigued me. The first one was the word proton, which I had come across many years ago in physics class but never connected it to medicine.

The other word that intrigued me was "graduate." It took me sometime to understand his use of the word because I had to experience it myself. And now after two and half months I think I fully understand how everybody who goes through this program equates their experience to a graduation. I am sure all of you can relate to it. It brings back memories of mixed feelings - the exhilaration that comes from getting it over with, the sadness that comes with leaving your friends behind, and the feeling of hope mixed with anxiety over what lies ahead. I share those same feelings right now and in fact I can say that altogether, counting elementary and high school, I have had six academic graduations but this graduation is the most important one in my life. Incidentally, in my most recent email conversation with Bob Marckini, he told me that one fellow actually came to his proton graduation in cap and gown.

My name is Fred Agnir and my wife Ruby and I live in Greenfield, Massachusetts. I was diagnosed last May 15 with a PSA of 20 and a Gleason score of 8. That put me in the high-risk category and so I am on the so-called three-part protocol meaning total hormonal blockade with Zoladex and Casodex, and radiotherapy consisting of a proton boost and mop-up with photon external beam. Those are just cold facts but what matters here is not numbers but how I feel.

I think the best way to describe my feelings is to tell you what images I visualize. Like some of you, I am a believer in the mind-body connection and this is the philosophy that we can help the healing process by visualizing. One form of visualizing is to set up goals and visualize them happening days, months and years from now. I'll tell you what the clearest and most persistent vision in my mind is right now. Yesterday, January 7, I celebrated my 64th birthday. My next birthday is January 7, 2004 and it just happens to be a Wednesday. On the evening of that day I visualize myself standing right here on the first anniversary of my graduation to tell everyone my story.

Part of my visualization therapy is to have daily conversations with my body. I get daily reports from it telling me how the war between the forces of my immune system and the invading prostate cells has been going. The first few months have been difficult. My field generals told me that the overwhelming numbers of the enemy's surprise attack led to some initial losses in the battlefield. Thanks to the combined aerial assault from the Hormonal squadrons Z and C, the enemy's supply lines have been cut and their advance slowed down. However, to reverse the tide, they needed some reinforcements. The last few months saw a series of pitched battles but this week the tide turned. I got the report from my generals that thanks to the effective bombardment from 16th Proton Artillery Brigade and the counterattack from the 28th Photon Armored Division, both from Southern California, the enemy has been routed and in full retreat. And now, crack NK commando units are engaged in search and destroy operations to take care of the remaining survivors.

Like some who have left us and like you after me, I leave this place a transformed person. Loma Linda has changed me from a cancer victim to a cancer survivor, from a person filled with fear of death to a person joyfully celebrating life - past, present and future, and from a person curious about this sometime obsolete and sometime experimental protocol to a full-fledged proton evangelist. I have a feeling that when I go back to Massachusetts, the lady friend who thought that my preview of the Brotherhood of the Balloon and support meetings indicated for her that I was joining a cult, when she hears me talk about my experiences here will probably say that she was right and that now I have been brainwashed.

As for the future of proton beam radiotherapy, the next 10 years are going to be exciting with the emergence of other centers in Boston, Texas, Indiana, Florida, Berlin and other places around the world. Loma Linda itself continues to push the envelope, so to speak, and so a lot of changes will take place. One of the changes is that a lot of people will no longer travel such distances to pursue their treatment of choice. So some of the cosmopolitan nature of our group will be gone. But no matter what happens, there will be no other place in the world where such elements of scientific vision, commitment, compassion and a strong foundation of faith in the miraculous hand of God in the healing process combine so well. In short, there is and there will be ONLY ONE LOMA LINDA.

I am writing in California where my wife Ruby and I are attending my cousin's 40th wedding anniversary. Last week we were in Massachusetts where we attended our granddaughter's graduation at Emerson College. As you can see, 12 years and five months after my proton treatment for advanced prostate cancer at Loma Linda and at age 76, I am enjoying my retirement doing a lot ot traveling. Last February, I was in Las Vegas running the diamond (60th) anniversary reunion of my high school class, of which I was the class president. Next month, I will be in San Antonio as one of the leaders of the 8th biennial convention of SUACONA (Silliman University Council of North America), the organization that I founded in 2001 of the more than 3000 expatriates from the university where I did my seminary training. And then in October, Ruby and I will be leaders at another stateside alumni organization convention in San Diego, that of the University of the Philippines where we met 60 years ago, dated and married.  We are happily observing 54 years of wedded bliss and counting.

My autobiographical book "When God Calls" is doing well, with more than 350 books sold or given so far. For some, part of the attraction is that I am donating 100% of royalties to Loma Linda. I always bring copies to every convention where I have requests for book-signing. Informaton as well as hard and digital copies may be obtained from Amazon and Barnes and Noble.

I have quite a number of community and church groups for whom I have been planning to do a presentation using your Power Point program. Some are actually chomping at the bit because I either told them about proton therapy or they read my book where I talked about it briefly in the penultimate chapter. It's just a matter of finding the time to do it. I think that no later than 2016 when I have no traveling plans, I will definitely start making the presentations. And again, I  might surprise myself and get going even earlier. I also enjoy responding to prospective proton patients who contact me.

Thanks to the BOB for all you do on our common mission as proton evangelists. There is a special place in God's glory for you.

Below is a photo of Pastor Fred Agnir and his wife, Ruby: 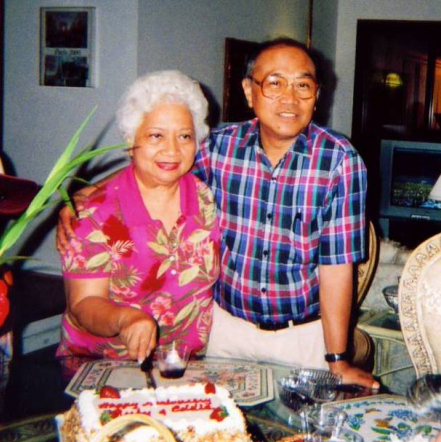