"I qualified for the hypofractionated proton therapy clinical trial (a shorter course of treatment), so I went ahead with it. It turned out great."

Two of my closest friends are doctors, married to each other, and until they moved to Florida, the husband was my primary care physician. While I was waiting for my surgery appointment, I shared my case with him. He told me not to jump into surgery so fast. He suggested that I speak with a man named Frank. Frank was a friend of his who had proton treatment. Frank told me that he had no side effects at all from his treatment and, in fact, he went to work every day after each treatment. He had a little fatigue in the afternoons, but that was it.

Note that during the decision making process, my urologist incorrectly told me that if I had any radiation for my cancer (proton was never discussed with him) and the treatment did not work, that surgery would not be an option. I later learned that that statement is not true.

My decision on what treatment to pursue had to do with minimizing risk, since I was also told by my urologist that any treatment would work for my cancer stage. So, why not pick the treatment that was the least invasive with a 25+ year track record of success, and would result in no side effects?

That was how I opted for proton. I called the Roberts Proton Therapy Center at University of Pennsylvania Health System (I lived in Southampton, PA) and set up an appointment.

At the time, the facility was instituting an accelerated protocol—28 treatments instead of the regular 44. I qualified for this hypofractionation clinical trial, so I went ahead with it. It turned out great. I started on July 15th—my 60th birthday.

I found the staff at UPenn professional, competent, caring, and made the procedures simple and pleasant. I had absolutely no side effects during or after treatment. Also, I work about 10 miles from the hospital, and I was only out of the office for about two hours each day.

During my treatment, I went to the gym every morning for two hours and did a fairly intensive aerobic workout. I maintained that schedule throughout my treatment.

I had and continue to have no incontinence, bleeding, impotence, depression, or any other side effects from the treatment. Although it's been just two years post treatment, I firmly believe that I am cured.

In the photo below, Mark is on the left in the red shirt. He participated in the American Cancer Society bicycle ride from Philadelphia to Atlantic City (65 miles round trip) in 2011 and again in 2012. 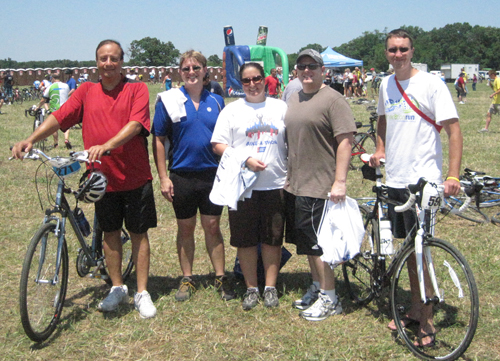