"I learned that the list of possible side effects from the urologist's recommended treatments were scary. I could not sleep. I woke Gene up one night and told him, 'I think we should go to Loma Linda.'"

Gene and I returned home September 14, 2009 after 45 days of proton treatment at Loma Linda University Medical Center in California.

Prior to Gene's proton treatment, while in the urologist's office for the biopsy results, Gene picked up a copy of The Wall Street Journal in the waiting room. There was an article on prostate cancer that listed all of the available treatment options, their effectiveness, and list of possible side effects. When the urologist gave us the biopsy results, we were absolutely floored; it was a diagnosis we did not expect.

In reading about proton beam radiation therapy, we learned that it was less invasive than some of the other options, there was less effect on surrounding tissue and organs, and fewer side effects. We then "Googled" proton therapy and found LLUMC in California. Gene immediately called them and they sent us a book written by a patient, Bob Marckini, "You Can Beat Prostate Cancer and You Don't Need Surgery to Do It" and a video. Anyone can get a copy of the book and DVD by logging on to the LLUMC website and clicking the "Request Information" button.

Later, Bob Marckini sent us a list of former proton patients and Gene called many of them, some two, three, five and ten years out of treatment. Every single one reported being healthy and doing well.

Meanwhile, we still kept our appointment with the oncologist. He and the urologist recommended treatment with Lupron to shrink the prostate (side effects last up to a year and may be permanent), and IMRT radiation for three weeks followed by surgery for brachytherapy (implantation of radioactive seeds). We mentioned proton therapy to the oncologist and he said that IMRT was similar and proton was expensive. Gene also thought he would be more comfortable at home; that it would be easier on the family; and he could sleep in his own bed; so he agreed to the regimen, with the Lupron treatment first to reduce the prostate.

I continued to read Bob's book and do my own research. I learned that the list of possible side effects from the urologist's recommended treatments were scary.I could not sleep. I woke Gene up one night and told him, "I think we should go to Loma Linda." At the time, our daughter, Vanessa, was staying with us. We told her about our decision and she agreed to stay longer and take care of our dog and two cats while we were gone. Our son, Robert, lives close by and he agreed to take care of the yard work and pick up our mail. This made things a lot easier and we learned that having a support system like that is so important!

We canceled the appointment for the Lupron shot at the urologist's office, and as recommended in Bob Marckini's book, sent Gene's biopsy samples to the laboratory at Johns Hopkins University Medical Center for a second opinion.

Gene contacted LLUMC again and asked for an appointment. We received a list of things he had to either bring with him or send to them in advance. They initially gave us a date of July 26, 2009 for a consultation. They mentioned that if they had a cancellation, we could be there the next day. After receiving our paperwork and test results, they moved our appointment up to June 29. We had a 90-minute appointment with the doctor. He described the treatment in great detail. The doctor also told us that Gene's pacemaker would not be an issue; in fact, he said, "We are aiming the proton beam at his prostate, not his heart." We were so relieved!

LLUMC is a faith-based 7th Day Adventist hospital and they treat the whole patient, body, mind and spirit. They recommend the patient participate in all their programs if they want to achieve the best results: See a nutritionist, attend prostate support groups for the patient only, as well as the caregiver support groups. They provide each patient with access to the University Library, a membership for patient and caregiver at the Drayson Center, which has a fitness center, indoor track, basketball, racquet ball, ping-pong, various water aerobics, chair aerobics, sauna, Jacuzzi, outdoor pool, health drink cafe, a great room for the kids to play those WII activity games, etc. We were told that the radiation treatment could make you feel really tired and that exercise was the best way to work through it.

LLUMC also provided us a list of hotels, apartments, etc. for our stay. We chose to stay at the Ritchie Circle Guest House, which has seven apartments in the house for proton beam patients only (see photo below). It had common areas: a huge dining room and sitting room with a library. We had three potlucks there, and it was good for the men to get together and laugh and joke about some of their experiences. We made many friends, and the Tuesday night potluck provided us a list of everybody attending and their addresses and e-mail addresses so that they could keep in touch. There were men there from Canada, Germany, and West Indies, Switzerland. At the Wednesday night get-together, we heard from the new patients, the graduating patients and sometimes from visiting proton alumni.

Pictured below: Eugene at the Ritche Circle Guest House. 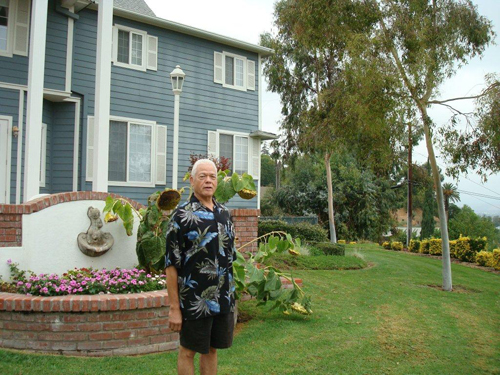 On Wednesday evenings, there were guest speakers. They provided a history of Loma Linda, a video on the building of the proton facility, and much more. We met with a nutritionist once a week, which provided helpful advice on avoiding problems during treatment. The social worker at the women's support group helped us all immensely; and she was available to counsel couples.

Eugene refers to his proton treatment as, "the best radiation vacation ever."

Pictured below: Eugene ready for his "daily dose." 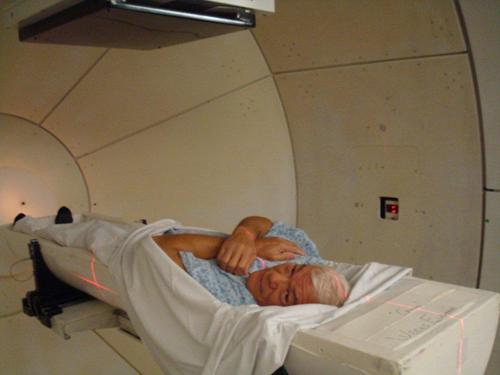 Gene has been a great supporter of the BOB and proton beam radiation for last 12 years since his treatment ended. Just last year, Gene urged his brother to undergo proton therapy. "I am grateful for the care Loma Linda provided to me," said Gene.