He didn't say, “I'm sorry,” or anything like that when he called. In August 2006, my oncologist stated coldly and without any discernible emotion, “you have prostate cancer.”

He gave me several options for treatment which I explored, but finally consulted my family doctor again who referred me to another oncologist for a second opinion. This doctor was totally different and had a great bedside manner. He was brimming with hope when he said to me, “yuou haven't bought the farm!”

I finally decided to have him remove my prostate and the date for the surgery was set for the first week in December.

In preparation, I donated two pints of blood ahead of time to have on hand for the surgery.

However, three days before Thanksgiving, I suffered a mild (if there is such a thing) heart attack. Because of the medications I had to take afterward, I could not undergo any type of surgery for months.

Meanwhile, my son, Greg, who lived in Los Angeles, had talked to a doctor friend of his who suggested I look into proton therapy at Loma Linda University Cancer Center in Loma Linda, CA. I was skeptical, but my son was so insistent I finally relented (more to get him off my back than anything else) and sent my information to LLUCC for more information.

Meanwhile, as I continued to research prostate cancer on the Internet, I found the first-hand experiences of Robert J. Marckini in his book, "You Can Beat Prostate Cancer: And You Don't Need Surgery to Do It." Bob's book was instrumental in helping me to make a decision regarding treatment. It gave a concise description of the options available in an easy to read style. He had experienced this dread disease himself and understood the challenges the readers would face so he offered them great hope (especially when it came to proton therapy).

I subsequently completed the forms sent by LLUCC to see if I would be a candidate for treatment. It was a question mark because my PSA was 21 and my Gleason 8. They accepted me and I began my treatment the first week of February 2007. I finished 19 proton treatments and 25 radiation treatments about 10 weeks later.

My wife, Veronica, and I stayed with my son and his family in Los Angeles. We commuted back and forth to Loma Linda - 150 miles round trip. We did miss establishing the close relationships that were cemented between patients who stayed in the motels near the hospital which helped them form close bonds as they played golf, went to dinner, etc. together. The offset for us was being able to spend time with our son and his family and really bond with our two young grand daughters, Juliet and Ashley, who we usually only saw a few times a year.

It is now nine years later and my PSA is .08. That's right! It is eight one-hundredths of one percent! I am now 78. I'm retired and having a great time! So thank you Loma Linda University Cancer Center, Bob Marckini, and the Brotherhood of the Balloon for being such an important and integral part of this story and the very happy ending!

Below is a recent photo of John with his wife, Veronica. 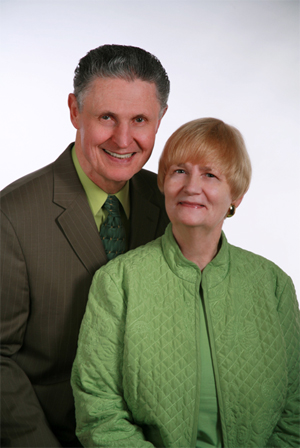