"Today, I am a healthy, fully-functional, 74 year-old man with no adverse side effects. My PSA is declining steadily."

When my annual PSA reading eventually registered over 4.0 ng/mL in 2012, my family doctor (a general practitioner) referred me to an urologist, who ordered another PSA test after recommending that I take an antibiotic to rule out urinary tract infection, which can sometimes result in a higher PSA reading.

The reading was still over 4.0 ng/mL and rising. The urologist suggested that I should have a biopsy, which he would perform. This was performed in September, 2012. I was diagnosed with stage 1 prostate cancer (T1c) later that month.

My urologist recommended surgery (radical prostatectomy) but I was hesitant. Even prior to my diagnosis I had been reading and studying about prostate cancer and the various treatment options.

My library of sources included: Dr. Patrick Walsh’s book, “Guide to Surviving Prostate Cancer, 3rd edition,” and Bob Marckini’s book “You can Beat Prostate and You Don’t need Surgery to Do It." Both of these books are available in paperback and are great resources. I read up on numerous treatment options from several other web-based references as well: brachytherapy, Intensity Modulated Radiation Therapy (IMRT) using x-rays, cryotherapy, surgery options (radical prostatectomy and Da Vinci robotic surgery), Proton Beam Radiation Therapy (PBRT), wait and watch, etc.

I also spoke with a large number of friends and acquaintances who had also been diagnosed with and treated for prostate cancer, themselves, or they knew of others who had been.  Some of the people from whom I gathered information, either personally or indirectly, had received Proton Beam Radiation Treatment at LLUCC.  All of these persons gave this facility (LLUCC) and their own treatment and results the highest marks possible.  I also spoke with people who had received other (non-proton) treatments.  Most were satisfied but some were definitely not satisfied (primarily due to side effects that they experienced following treatment).  Those who were not satisfied were low in number but my sampling of individual persons having specific procedures was also somewhat limited.

The next step, for me, was to see if my insurance would cover me for PBRT. I was enrolled in a Senior (Medicare) Plan, a Preferred Provider Organization (PPO) through a local hospital.
The PPO is a gatekeeper for Medicare. Even though Medicare routinely approves PBRT for cancer treatment, the PPO denied my request to be approved for PBRT at LLUCC because it would have been out-of-network.

There were no PBRT facilities in my PPO local network. The PPO wanted me to use IMRT, Tomotherapy, or similar x-ray treatment, or surgery (radical prostatectomy or Da Vinci robotic), all of which were available locally – within the PPO network. I filed two appeals and both were rejected.  Fortunately, for me, this discovery period was in the last few months of calendar 2012 and this coincided with the “open enrollment” period for medical insurance offered through the company from which I retired.

One of the options for medical insurance (for retirees of my former employer) was Medicare (as the primary insurer) plus a Medigap (or Medicare Supplement) Policy offered by various insurance companies. My company even provided a stipend to help pay for the Medigap Policy.  I chose this option and selected the AARP Plan F (underwritten by United Health Care) for my Medigap Policy. I was approved by Mid-December of 2012 and scheduled my consultation/evaluation appointment at LLUMC for January 7, 2013.

We were able to rent an apartment in Loma Linda, CA, for the duration of my stay. This was all arranged in December 2012.  My wife and I packed up our SUV and drove to Loma Linda on January 5, 2013.  After my consultation visit, there was about an 11-day wait period before my treatments actually began.

Customized hardware components (bolus and aperture pieces for both left and right side irradiations) for the proton beam accelerator needed to be fabricated at a shop in town.
My wife and I used this time to get familiar with Loma Linda, CA and the surrounding area. We looked upon this whole adventure as a "Radiation Vacation." It proved to be just that because the treatments only lasted a few minutes each day (Monday through Friday).  Of course, I had to report early enough to change into a hospital gown and wait to be called. There may be delays if the machine was down or for other reasons, but generally I was in and out in about 45 minutes.  I had the rest of the day to continue our “vacation” activities (golf, beaches, museums, visiting near-by towns and scenic areas, etc.). We also participated in the marvelous educational and physical fitness opportunities that were provided by LLUCC.

For example, we attended Proton Group pot luck at Loma Linda Springs apartments on Tuesday evenings, lectures at Drayson Center on Wednesdays, and a Group Dine Out at a local restaurant on Thursdays.  All of these activities, as well as free membership at the Drayson Center athletic facility, were optional but we enjoyed participating and attended those activities regularly.

I entered the standard treatment regime of 45 treatments (total).  Each treatment delivered 1.8 Gy/day (equal to 180 rad/day) to the prostate target organ. The proton beam is narrowly focused and deposits most of its energy at the end of its travel path (in the prostate gland).  This characteristic is the main reason that there is less collateral damage to healthy tissue from proton beam (PBRT) vs. x-ray (IMRT).  This unique phenomenon is described as the Bragg curve effect. You can learn more about this characteristic by googling “Bragg Curve”.

The proton beam was directed at the hip and was delivered from the left and right side on alternate days. This is the normal protocol although other options are available. Since I was diagnosed as Stage 1, I was not given supplemental x-ray treatments or hormones.  I completed my treatments at Loma Linda on March 20, 2013, and started our drive home that same afternoon.

I am most pleased with the outcome of my treatment.  Today, I am a healthy, 74 year old, fully functional man with no adverse side effects. My PSA is declining steadily. As of Jan 2016, it was measured as 0.67 ng/mL .  I am expecting my PSA curve to reach its nadir (a very low value, probably below 0.5 ng/mL or maybe even below 0.1 ng/mL) in another year or two and stay there.

I know that I made the right choice (for me) in choosing PBRT for my prostate cancer treatment.  I am submitting my story in the hope that others can benefit from my research and my experiences.

Below is a photo of Jeff playing golf during treatment. 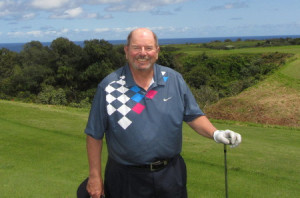