Treated with proton therapy in early 1991, Harold Rabin has been cancer free for 24 years, and with no long term side effects.

This testimonial was written by Bob Marckini following a telephone interview with Harold Rabin in April 2004.

In 1990 Harold had angioplasty following a heart attack. Two months later he was diagnosed with prostate cancer. His urologist, who favored surgery, expressed some concern about the trauma of a radical prostatectomy. This prompted Harold to begin a search for an alternative treatment. He investigated cryosurgery, which was new at the time, and spoke with his wife’s cousin, a medical doctor doing research at the National Institute of Health in Bethesda, MD. The doctor didn’t hesitate. He said, “Go to Loma Linda. They are using Protons to kill cancer, and this exciting technology works. Besides, one of my former colleagues at NIH is there now.”

Harold visited Loma Linda and was accepted for treatment in early 1991. He remembers telling his urologist about his choice to do Proton therapy at Loma Linda. His mood abruptly changed, according to Harold. “All of a sudden I wasn’t ‘Harold’ anymore, I was ‘Mr. Rabin.’” And his next comment was, “Mr. Rabin, if you want to be in an experimental program, that’s your business.”

Harold commuted from his home in Palm Desert, 110 miles round trip each day for eight weeks - age 70 at the time - and “had the most wonderful experience of my life.” He recalls, “Dr. John Antoine was my physician at Loma Linda, and he was terrific. Also, a young physician by the name of Carl Rossi was starting around that time.”

When asked about his recollections of Loma Linda 13 years ago, Harold noted that only one gantry was operating. The set-up and treatment took about a half hour. Also, “I left the hospital each day with magic marker marks all over my body.” But most of all, he remembers, “the people there were the most pleasant, most wonderful, most gracious, and most professional I have ever met.”

It took about four years for Harold’s PSA to reach a nadir of 0.3, and there it has stayed for the past nine years. To say Harold is happy with his results is an understatement. He remembers having a few episodes of rectal bleeding, but “that’s been gone for years.” And he has experienced no other side effects from his treatment.

I mentioned to Harold that his 1991 treatment date makes him a desirable reference for those considering proton therapy. I asked if he would consider having his name added to the former patient “Call List” for prospective patients. He said, “Absolutely! I remember how fearful I was when I was diagnosed. And, if people hadn’t helped me, I never would have found Loma Linda.”

There’s something about proton therapy that attracts the nicest people.

Update May 2006 (Submitted by Harold)

On May 4th 2008 I will be celebrating the 17th anniversary of my final treatment at Loma Linda. I will be 87 on May 5th and I feel great. I still work part time, play golf 3 times a week and go to the gym regularly. I feel that I owe my "gift of years" to Loma Linda and the proton treatment that gave them to me.

I was one of the early proton patients 20 years ago. As a result I have lead a full, happy life ever since. I am now 89 years old and going strong. I attended the 20th anniversary celebration at Loma Linda in October where I met BOB founder Bob Marckini and we had a picture taken together.

I am in my 21st year of freedom from prostate cancer thanks to the proton treatment I received at Loma Linda. My PSA as of 8/29/2012 is 0.36. It has not changed much for more years than I can remember. As for me, I'm approaching my 92nd year and enjoying every day of it.

This is the title of a recently published article. The “93-year-old” is BOB member, Harold Rabin. Here are some excerpts:

The former president and founder of Illinois Technical College didn’t know that he would be around to tell this story 24 years ago when he became only the tenth person in the world to receive proton treatment for prostate cancer. But today the story has a happy ending, as Harold is cancer free and living a life that, without the miracle of science, wouldn’t have seemed possible.

“At the time I was diagnosed with prostate cancer, proton therapy had just been developed as a treatment for cancer,” recalls Harold. “One of my wife’s relatives was working as a research oncologist at the National Institute of Health in Bethesda, MD. He suggested I consider proton treatment because studies were emerging proving the effectiveness of proton to eradicate prostate cancer while at the same time minimizing typical side effects like incontinence and impotence.” Harold was then living in Palm Desert, CA, not too far from Loma Linda University Cancer Center.

Harold recalls feeling no pain or discomfort during treatment. He never experienced fatigue as each afternoon following his treatment he had enough energy to play a twice-weekly round of golf or meet friends and family to socialize.

Today Harold lives a full and active life in his hometown of Northbrook, IL, where he continues to drive himself to his many social activities like going to dinner, theater, and movies with friends. He volunteers by sharing his experiences with prostate cancer patients.

Here is a photo of Harold Rabin with his friend, Jean. 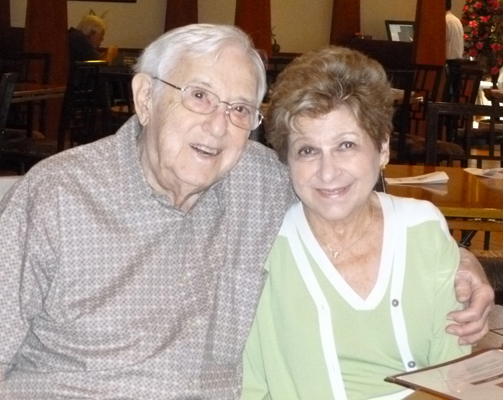 Harold tells us, although he's having a few vision problems, he remains in good physical shape. He also says, It might be newsworthy to point out that I was the 10th person treated with proton therapy for prostate cancer 25 years ago at LLUCC." We do think that's newsworthy! 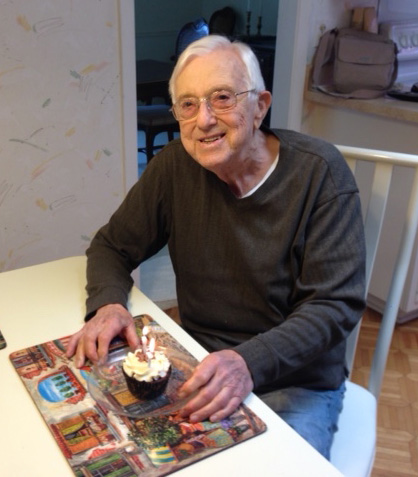 We recently received an email from Harold who said, "I'm still here after 26 years!" On May 5, 2018 Harold will celebrate his 97th birthday and his "27th year of freedom from prostate cancer—thanks to Loma Linda University Cancer Center."