"At the age of 79, I am in excellent health and take no medications other than an occasional vitamin B12 supplement."

When my brother and I were young, my mother loved to read Bible stories, biographies, and stories of missionaries to us.  We were so intrigued by the stories of Robert Moffat and David Livingstone and “the smoke of a thousand villages” that we often pretended to be missionaries exploring Africa … my brother was a missionary doctor “treating” the sick, and I was a missionary pastor, “preaching” to the villagers and “baptizing” the converts. The seed for mission service had been planted in my heart.

After marriage and three years of working in civil service, including completion of a managerial training program at Naval Air Station Alameda, I began feeling a strong urge to prepare for mission service … I returned to school and in 1962 earned a Bachelor’s degree in social studies and religion from Pacific Union College in California. Six weeks before graduation the following year, with a Master's degree in the teaching of social studies. I received a call to serve in Africa. While serving in Africa, I later earned a PhD in International Education and Anthropology from the University of Illinois.

In addition to teaching high school Bible classes in Auburn, Washington for three years and pastoring a four-church district in Salina, KS for five years, I spent thirty fascinating years in mission service. Twenty-five of those years were spent in Africa, the place of my childhood dreams—mostly Zambia, Zimbabwe, and Sudan—as teacher and administrator. My final five years before retirement were spent in Papua New Guinea where I served as president of Pacific Adventist University. Interaction with government officials, ambassadors, and heads of state heightened the interest and challenge of these varied assignments.

I first learned of proton therapy while working in Papua New Guinea. Pacific Adventist University is a young sister institution to Loma Linda University, and somehow we got on Loma Linda’s mailing list. Periodically, we received Scope, identified as a magazine for the Loma Linda University health community. Since the subscription was addressed to the university president, it came across my desk before being forwarded to our library. Having a strong interest in science, I was fascinated by the magazine’s report of the world's first hospital-based proton therapy facility. That it had been built at a hospital operated by our church was nothing short of mind-boggling to me! At the time, I had no idea of the impact that one news article would have on my future.

Upon my retirement to Florida in 2003, a routine physical revealed that I had prostate cancer with a Gleason score of 6. I sought the advice of the urologist who had performed surgery a few years earlier for my dad’s enlarged prostate. A flexible man, the urologist was happy to recommend radical prostatectomy, external beam radiation therapy, brachytherapy, or watchful waiting to deal with my cancer. Because surgery had resulted in my dad wearing Depends for the rest of his life, I was reluctant to go that route, and I had heard disquieting things about the other options, as well. I asked the urologist if he was familiar with the Loma Linda Proton Center and the use of proton radiation for prostate cancer. Unfortunately, he knew nothing about the institution or the modality and was unable to offer any recommendation, either pro or con. It was up to me to do my “due diligence.”

After extensive research and a couple of phone calls, I came to the same conclusion Bob Marckini shared in his very informative book, You Can Beat Prostate Cancer. I chose proton therapy and was soon on my way to Loma Linda.

While at Loma Linda I continued my research and concluded that although I had eaten a vegetarian diet all my life, I had unknowingly increased my risk for prostate cancer significantly by the large quantity of cheese I had included in my diet. As a result, I immediately removed all dairy products from my diet. The wisdom of this decision was reinforced for me several years later when I read The China Study by T. Colin Campbell.

The effectiveness of proton treatment in tandem with a vegan diet tells the rest of my story. At the age of 79, I am in excellent health; have very low PSA; I don’t wear Depends; and I take no medications other than an occasional vitamin B12 capsule … Looking back from the perspective of 13+ cancer-free years, I consider it providential that Scope magazine was addressed to the Pacific Adventist University president rather than the university library.

Thank you, Dr. James Slater and the Loma Linda administrators and trustees, for your willingness to implement cutting-edge, life-saving, quality-of-life enhancing technology! That technology has enhanced my life.

Below is a photo of Harold, his wife, Verna, and their new friend on a recent trip to Thailand. 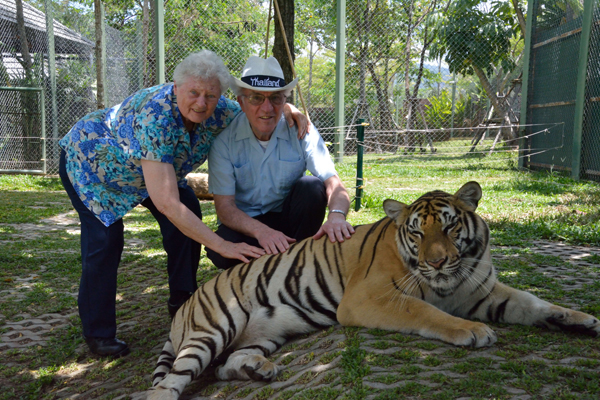