"It is no wonder that we are all so eager to guide others to this best of all prostate cancer therapies."

My twin brother was the first to be diagnosed with prostate cancer in the fall of 2005. He had regular open surgery, and was plagued for many months afterward with blockages of the urethra caused by scar tissue forming at the suture to the bladder. After five emergency catheterizations and laser surgeries to open the blockages, and a trip to the Mayo Clinic to find a solution, he finally resolved the problem with a six week regimen of frequent self-catheterizations. Along the way, he suffered from bladder infections, incontinence, and impotence.

In July of 2006, my PSA score came back at 3.22, a jump of 100% from the 1.6 of the previous year. Two biopsy cores out of 12 showed cancer with a Gleason of 3 + 3 = 6, and my doctor staged my cancer at T1c. I was a healthy and fit 61 year old, and didn't want to endure the punishment my brother had experienced. I resolved to study all of the alternative treatments.

I looked at surgery first, since that is the most common treatment, and because I was put off by the thought of radiation. I felt that I might avoid my brother's fate by going with the less invasive hand laparoscopic or robotic laparoscopic surgeries. I consulted with two of the most experienced practitioners of these surgeries in the country, and came away with no better feeling about my prospects of avoiding complications and side effects. To keep an open mind, I also consulted a nationally-recognized practitioner of open surgery, but left with the same misgivings.

With surgery looking unattractive, I visited a leading radiation oncologist in St. Louis, and heard the story about brachytherapy (radioactive seeds) and photon beam radiation. The possible side effects that were described to me sounded no better than surgery, so I found the door. I also read about cryotherapy, and decided against it for the same reason.

Throughout these consultations, and research that I did on the Web, I was continually frustrated with my inability to find objective data on treatment results and side effects, or to get names of past recipients of these treatments to ask about their experiences. I did know a few guys who had undergone surgery, and they all related stories of pain, suffering, and complications.

I had heard about proton therapy early-on from my brother. He had a friend who had received the treatment at Loma Linda, and the guy reported great results with no side effects. I had been skeptical, and pushed it aside as I investigated the other therapies. Nevertheless, I had raised the question about proton therapy with every doctor that I had consulted, and was always told that it was not a viable option.

With no options but proton left, I decided to examine this treatment further. I was immediately amazed about how easy and fast it was to get information. Loma Linda University Medical Center responded instantly to my inquiries with videos and a packet of information, including a 15 year study of Loma Linda's proton results. The Proton Bob website yielded much information about the treatment, many testimonials from past patients, and (imagine!) a long list of guys willing to talk to me! I called several of those men, along with my brother's friend and two other past proton patients referred by other friends of mine. The positive stories that I heard from everyone convinced me that I had found the answer to my treatment question.

I began my therapy on Nov. 1, 2006 and finished my 44 proton-only treatments on Jan. 5, 2007. Along the way, I experienced one of the happiest and most rewarding times of my life. The culture of Loma Linda University Medical Center simply has to be experienced to be believed. We were issued name tags with the word "GUEST" printed in bold letters upon them. This word best sums up how we were treated—as a guest in their house, to be respected and accommodated in every way possible.

The initial consultation with my Loma Linda doctor was a good example of the culture. Dr. Jabola spent three hours with me answering endless questions, and supplying other information for which I knew too little to ask. I was the one that grew weary and ended the session! My earlier consultations at all other hospitals combined did not equal three hours, and all of those other doctors were noticeably impatient to end the meeting and move on.

The staff of the proton center became like family, and four nights a week were filled with activities planned for the proton patients. And what a great bunch of people those patients were! They came from every corner of the country, as well as from abroad, and represented a dizzying array of professions and economic levels. In the real world such differences often keep people apart, but at Loma Linda we were all bound together by the common plight of cancer and a common goal to beat it with protons. All pretense was dropped and instant friendships were made, many that will endure for life.

As if the close-knit community of staff and patients wasn't enough, my experience was further enhanced by the perfect weather and endless attractions that southern California provides. I spent week-days working at my job from my rented duplex, but every weekend brought exciting adventures throughout Los Angeles and the Inland Empire. I chronicled these excursions with 988 photos!

Oh, incidentally, there were proton treatments each day, and they were a piece of cake! The much-heralded balloon was not the frightful experience that I had imagined, and my side effects were virtually non-existent. Three times during the treatments, I developed a burning sensation while urinating that was instantly chased with Advil taken over a day or two. Continence and erectile function were not affected in any way. I did not change my diet, except for dropping citrus, and I worked out three times a week. I never felt any fatigue.

Four months after I returned home, in May of 2007, I developed neovascularization of the rectal wall—the formation of new blood vessels on the surface of the rectum in response to radiation damage. I'm told that this condition arises in approximately one third of proton patients. In most cases, it causes minor rectal bleeding, and self-corrects in a few months. My condition was worse, causing a lot of blood in the stool, and irregular bowel movements. To correct the problem, I had two laser coagulation treatments in Oct. 2007 and Jan. 2008. These treatments were just like getting a colonoscopy, and they completely alleviated the problem. While a bit of a hassle, this complication was nothing compared to the troubles experienced by recipients of the other therapies. In June of 2010, my PSA stands at 0.4, and I have full continence and erectile function.

Like so many of my proton brethren, I am deeply grateful to Loma Linda for making me well, and for preserving my quality of life in the process. It is no wonder that we are all so eager to guide others to this best of all prostate cancer therapies. 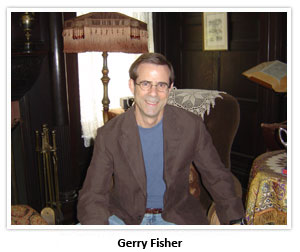 Just got my latest PSA results - a new low at 0.3! Below is a photo taken on my trip to Egypt in September. Getting around okay in 116 degree heat proves that protons did nothing to diminish my vigor! 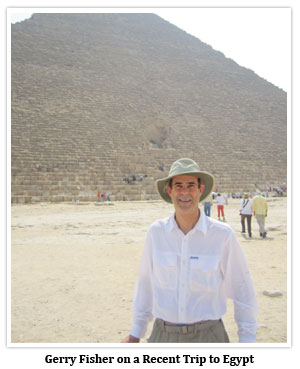 I'm happy to say that I am 74 and thriving!  At the end of the year, I will have been retired for seven years and have enjoyed every minute. I work out three times a week and eat a healthful Mediterranean diet. I still travel —— have been as far as Seattle to the west, Indianapolis to the east, and Austin to the south this year, as well as Paris, Prague, and Budapest. Did Greece last year. At home I spend a lot of time playing with my 1892 house —— its featured on eleven pages of the December Old House Journal!  I will forever be grateful for the wonderful treatment I received at Loma Linda and thank Deb Hickey and Bob Marckini for their continuing to promote the best of all prostate cancer therapies. - Gerry