"In the end, it is your body and you should do the research, be informed of all the options, and make the right choice for your care."

I am sharing my experience with prostate cancer to help inform others about a treatment option that is often not suggested to a patient facing one of the most important decisions of his life.

In late November 2012, I had routine blood work performed for my diabetes. I was informed by my primary care physician that while my diabetes was well in control, my PSA had jumped from 2.4 to 4.2 in a short period of time. He suggested I see an urologist.

I saw the urologist in early December 2012, and upon reviewing my records, he recommended I have some cores taken from my prostate. Ten days later, he had the report back stating there were three places on my prostate that had cancer cells. He also advised there was no rush for treatment since it was small, could be managed quickly, and would not have long term detrimental effects. We discussed a variety of treatment options including: seeds, freezing and radiation. Being a surgeon, I was not surprised that he recommended removal by surgery. But, he never mentioned proton beam therapy.

I began researching my options by speaking with others who had dealt with prostate cancer. Many who had had their prostrate removed advised me that given a chance to do it again, they would not have had the surgery. Some of them had to follow surgery with radiation. My brother and a friend both used seed therapy, had many problems, and died within three years. Full radiation had many side effects. Freezing does not always work and may still require radiation. It seemed that there were some problems, side effects, or other issues attached to every type of treatment. However, my research into proton therapy revealed not one complaint or unhappy patient. Based on my findings, my wife and I made the decision to go with proton therapy.

By mid-December 2012, I had learned that Loma Linda University Medical Center in California was the leader in the proton method of dealing with prostate cancer. After an initial meeting on January 8, 2013 to review my case, I decided this would be the best method of treatment for me. Radiation treatment can cause side effects to organs near the area being treated for cancer, whereas proton therapy uses a focused ray of proton particles to destroy cancer tissues that is delivered in such a precise manner that it does not cause damage to surrounding healthy tissue and organs. The doctors explained that I would require 45 treatments.

By January 12, 2013, the doctors had my "pod" ready. The pod is a form made to fit around a patient's body to insure that the body remains in the same position for every treatment down to within one millimeter. This helps in the focused delivery of the protons so that surrounding tissue and organs are not affected.

On March 21, 2013, I had my 45th and final treatment. During the entire treatment period I experienced minimal side effects - just tiredness in the afternoons and increased frequency of urination. Other than that, I felt fine and was amazed at the lack of side effects. Overall, considering the circumstances, I considered it a wonderful experience. Medicare covered 80% of the cost and with most supplemental insurances, there is no out of pocket cost.

I am sharing my experience so that others, who may face a decision regarding prostate cancer treatment in the future will be aware of this treatment option and consider it along with other suggested options. I have spoken to many patients who were also happy with their proton treatment. However, in the end, it is your body and you should do the research, be informed of all the options and make the right choice for your care.

Here is a photo of Gene and his wife, Irmie. 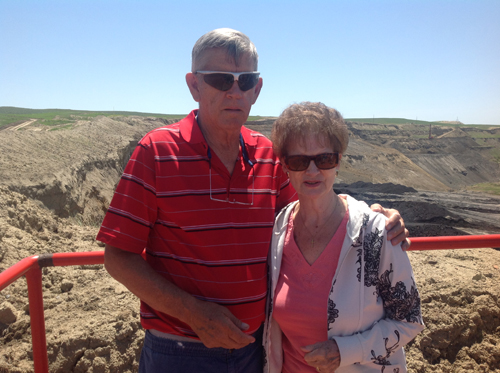