I was diagnosed with prostate cancer in 2016 at age 58. It was the most challenging time in my life. Even though I expected the diagnosis, the realization hit me like a brick, the shock of which culminated with my wife finding me crying in my office. From that point forward, my energy was spent finding the best treatment option available ...

My friends urged me to get a second opinion and two close friends persuaded me to look into proton beam therapy for my 4+3 Gleason diagnosis (PSA of 5.7). SCCA, the Seattle Cancer Care Alliance, was "in network" for my insurance, so I scheduled a consultation for the end of March, 2016.

In preparation for the appointment, SCCA had requested my biopsy slides (not just the results) and reviewed them. They discovered that the original pathologist had missed something very important and that my cancer was more aggressive than originally thought. Although there was no evidence that the cancer had spread substantially, there was a high likelihood that undetectable microscopic spread had occurred and recommended a one- to two-year course of ADT (hormonal treatment)), followed by proton beam radiation. I agreed and began radiation 60 days later.

During treatment, I spent the summer months biking from my temporary lodging (a furnished rental cabin in the woods) to SCCA five days a week. Away from my family, I occupied by spare time with walks, biking and, being a pilot, I volunteered at the Museum of Flight at Boeing field.

The staff at SCCA treated me wonderfully. I never felt like "a number" and the support I received and the friendships I built were amazing. Through the darkest time of my life, I ended up actually enjoying my stay in Seattle. Feeling 100 percent confident in my decision to have proton therapy at SCCA and wearing the white terrycloth robe I was given, I considered my daily half-hour visits a "spa treatment."  The doctors, nurses, radiation technicians and front desk staff made me feel at home and helped me far beyond the physical medical treatment.

My proton treatment ended August 1, 2016. I elected to continue my ADT drugs a full two years following proton treatment. My PSA was essentially zero by the end of treatment, but some my doctor (and some friends) told me to expect an increase in my PSA, but that it should level off and begin dropping -- and that's exactly what happened. Today, my PSA remains low and steady.

When you're confronted with a potentially deadly disease, it's a life-changing event. It allowed me to ponder how I wanted to spend the rest of my life; what was important and what wasn't too important. I'd always been involved in business, but that suddenly took a back seat to something I'd always wanted to do: be a professional pilot. In the 2000's, prior to my diagnosis, I'd dabbled in being a local corporate pilot. In 2015, prior to my diagnosis, I decided to attain my Airline Transport Pilot's license and I accomplished that and at the same time, obtained a type rating in the Boeing 737 using a simulator in Miami. I really had no plans to take it further and get a job in aviation, but thought the ATP license would come in handy at some point if I ended up applying for a corporate aviation pilot position.

Following my proton treatment for prostate cancer, I jumped through some hoops and the FAA granted me a first class medical. I landed a temporary job as a copilot for a local charter outfit, but that aircraft ended up being relocated and my small bit of flying came to an end.  The aviation bug had bitten however and in November 2017, at the age of 60 years old, I applied for and was hired by an airline to fly the Boeing 737. Never in a million years did I think I'd EVER end up in the "big leagues," but on January 28, 2018, I passed my checkride with the airline (all done in a simulator), was awarded my beautiful wings and epaulets and a few weeks later, having never flown the actual aircraft, found myself at the controls of a 737, pushing forward on the thrust levers and guiding 130,000 pounds of aluminum, fuel and people down a 10,000' runway and into the sky.

My first landing that day left me with a smile on my face as wide as the Mississippi, a smile that signaled I'd reached my dreams -- and that I'd left prostate cancer far behind me. The wonderful staff of SCCA had not only helped me beat cancer, but unknowingly, they played a huge part in allowing me to achieve my dreams. 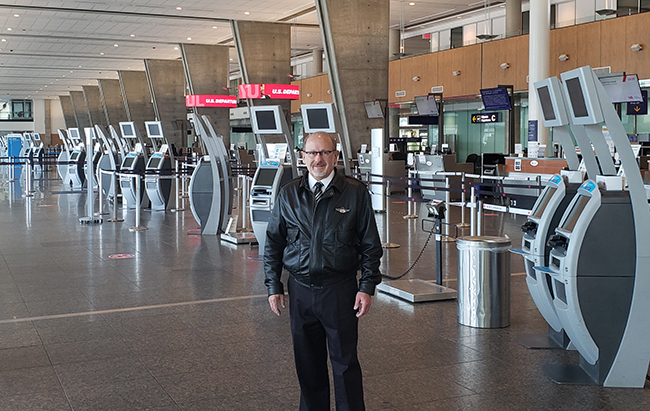