"I have been and continue to be healthy and blessed thanks in no small part to my experiences and relationships at Loma Linda. That part of my life began a little over six years ago and the adventure continues today."

In November of 2008, I was diagnosed with early stage prostate cancer and faced with the reality of my own mortality. I had a PSA of 9.5 and a 3/4 Gleason score. My biopsy indicated the presence of cancer. On top of the diagnosis, my marriage had fallen apart; my life had taken an unexpected turn. My best friend advised me to deal with the health issue and everything else would take care of itself. In retrospect, it was great advice.

I began searching the Internet shortly after my diagnosis. Then I scheduled consultations with a few doctors for treatment options. Toward the end of my search for an appropriate treatment option for my prostate cancer, I shared at a men’s support group that robotic surgery would be my course of action. An older gentleman seated next to me at the meeting took my arm with a grip that belied his age and tearfully said, “Don’t do it ... You’re too young for surgery. You’ll be sorry." Then he outreached his hand, showed me a book, and said, "Here, read this.” The book title was, "You Can Beat Prostate Cancer: And You Don’t Need Surgery to Do It" written by a fellow named Robert Marckini. The gentleman went on to explain that he wanted to pursue proton therapy for his prostate cancer but had other health issues; apparently his doctor believed his prostate cancer was not his most pressing health challenge.

I had heard of proton therapy, but two of the doctors I consulted with dismissed it as an "experimental treatment," so it was not on my hit parade. I went home and spent most of the night and early morning reading Marckini's book. Two days later, I called Loma Linda University Cancer Center in California and arranged for a consultation in April of 2009.

During the previous four months, I had consulted with urologists, surgeons, and oncologists specializing in both permanent and temporary radioactive seed implant therapy. Since my prostate was somewhat enlarged, each doctor I consulted with insisted on Lupron shot(s) as part of the therapy. One doctor cavalierly stated, “It’s no big deal and the effects are usually temporary.” My research indicated that I wanted to avoid hormone therapy if at all possible. My consultation with a doctor at Loma Linda put my mind at ease. He assured me that he felt proton therapy would take care of my cancer. I asked him if part of the therapy would include hormone treatment (specifically Lupron). He looked at me somewhat quizzically for a moment and said, “No. That won’t be necessary. Actually, your prostate is somewhat enlarged, but we can definitely treat it without hormone therapy.” This doctor, who appeared to be young enough to be my grandson, put my mind at ease. I could have kissed him. At that moment I knew proton therapy would be my path to wellness, and I also felt I could trust this doctor to design my treatment plan.

During my initial visit to Loma Linda, I was directed to the Drayson Fitness Center where I saw Loma Linda's mission statement, “To make man whole.” I believe this statement speaks volumes regarding the care I received. I began my treatment a month later. During my ten weeks at Loma Linda I played tennis one or twice a week with a wild group of seventy, eighty, and ninety somethings, golfed with fellow patients, attended Wednesday evening programs and Tuesday potlucks, and visited local restaurants on Thursdays. I did all this because I believe, as does Loma Linda, healing depends on social and spiritual well-being as much as medical intervention. Our laughter and time together was golden.

Some time after completing my treatment at Loma Linda, I tried to contact the gentleman who had loaned me Robert Marckini's book. His wife told me he had passed away. She was touched to hear that her husband had a hand in leading me to Loma Linda and encouraged me to pass the book along to someone else who might need it. I have done that several times.

For four years after my treatment, I continued to return to Loma Linda twice a year to monitor my progress. I was a bit disappointed last year when my doctor told me I could schedule my visits to Loma Linda just once a year if I scheduled my annual physical six months between visits. It made sense, but I would miss Loma Linda - especially getting together with Dr. Lynn Martell for a round of golf each time.

Loma Linda has become a fortunate benchmark in my life, one that I have come to respect and appreciate. After a little more than two years since bilateral knee replacement surgery and almost six years since proton therapy at Loma Linda, I maintain a pretty active life (and a .48 PSA), working out at the Tacoma YMCA and sailing the San Juan Islands with my buddies for a good part of the summer. I play golf often. I scored my first hole-in-one at San Bernardino Country Club while playing in a foursome with Dr. Lynn Martell in February of last year. To quote Dr. Martell, "Those protons really work!"

My parents are both healthy and independent. Dad’s love is hunting duck and geese in the Sacramento watershed. He also makes a pretty tasty pomegranate jelly when the ducks aren’t flying. Mom is a life master duplicate bridge player and voracious reader. Last year I helped Mom publish her second book, "Cloudy Encounters." It’s a whimsical story that explains some of the mysteries of weather and has received excellent reviews on Amazon. We are both proud of its success. About five years ago, Mom and I began taking four to six week road trips. Grandpa, Mom’s Dad, homesteaded in South Dakota and as time passed he built a ranch and farm that my uncle continued to work. When Grandpa passed, he left some of the land to Mom, so we go there in fall to visit relatives and friends and to see the land where she spent her younger years. More importantly, we enjoy each other’s company and have become as close as a mother and son can become. Our conversations have no boundaries and encourage provocative thought for us both. We are eagerly planning our sixth road trip this fall. Mom will turn 98 during the journey. She is a pistol.

I travel, hike, read, attend the symphony and other concerts when I can, and attend to the garden when I have time. Ideas for a historical novel about my grandfather who survived the Titanic and homesteaded in South Dakota, and a play about ten greedy and wicked men, continue to rattle around in my brain and are beginning to get onto my computer in fits and starts.

I received a call from Gig Harbor High School asking if I would be willing to help adjudicate students' "Senior Service Projects" - a graduation requirement here - later this month. After more than 35 years as an educator, how could I say no? It's a chance to stay in touch with students and celebrate their success. Besides, they serve a pretty healthy lunch and I can touch base with some of my colleagues.

During my visit to Loma Linda this past January, my doctor told me I was in good health. I asked, “Does that mean I’m in remission?” He smiled and answered, “Actually, it’s better than that. It means that you have no evidence of disease.” So, life is sweet, albeit short. Length is not my measure for a successful life, but the richness of the time we spend learning, sharing and exploring. For me, personal relationships are the gold standard that guide the quality of our lives. I have been and continue to be healthy and blessed thanks in no small part to my experiences and relationships at Loma Linda. That part of my life began a little over six years ago and the adventure continues today.

Below is a photo of David. When he sent it to us, he wrote in his message: "To quote Jack London, 'My shadow has fallen on pleasant places.'" 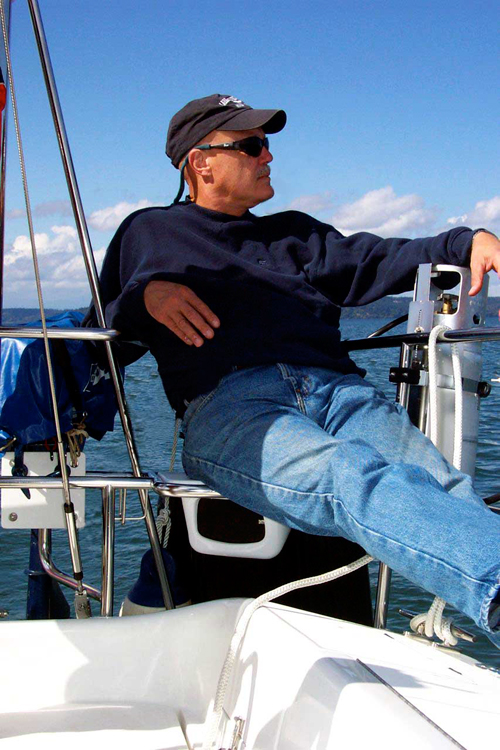