"It's a great blessing to know that God directed me to Loma Linda and I love to share my story with all."

It was January 9, 2008. Jolted by what seemed to be a cap pistol firing up my backside, the urologist calmly removed 10 biopsies from my prostate. For some 8 years my doctor and I had watched my PSA creep from 3.1 to 3.8. With the digital exam normal, there was no pressure to biopsy. However, in the summer of 2007, the number spiked to 4.8 and the follow-up in October registered 5.0.

So here I was on his table getting popped by his biopsy "pistol." Two weeks later, I sat in his office thinking about my life, growing up in Texas, my future plans and priorities. My life as a physically active father of two beautiful grown daughters, as a teacher, administrator, pastor, and fund-raiser, were compressed into the moment as I heard the word macho John Wayne called the "Big C." No man feels macho when that word crashes his eardrums…Thankfully, Gleason 6 offered hope. However, a post-biopsy PSA some 60 days later rendered another spike to 6.1. It was time for action.

The urologist encouraged the "shock and awe" of prostate extraction which fell on deaf ears. Radiation seeds were the first choice and radiation beam the second. I knew about Loma Linda as my older brother had attended medical school there many years ago.Then I read Bob Marckini's book, You Can Beat Prostate Cancer, and warmed to the idea of checking out proton therapy more carefully. It impressed me that Marckini was a medical layman who'd really done his homework. He had no preconceived ideas or a career bias. So, less than five months after my diagnosis, I was being fitted for the treatment "pod" at LLUMC as a number of providential circumstances had unfolded.

My first impression of the James Slater Proton Center was that it's awesome! But as someone said about its visionary, Dr. James Slater, "He thinks enormous thoughts about small things." The more I got acquainted with the technicians and the support personnel; I knew that God had brought me to the right place! Of course, who couldn't appreciate the balance of professionalism and compassion under the care of my superb radiation oncologist? And his assistant enabled me to feel like a valued person instead of just another number in the program. Moreover, understanding that the Bragg's peak concept as explained by the Loma Linda physicists was limiting collateral damage by the proton radiation was comforting as well.

I never told my employer how much fun I was having with fellow proton guys and their spouses. Especially great was the mountain biking with my new buddy and fellow proton zappee, Joe Gadd, of Denver. It was truly a "radiation vacation." I soon settled into the mind-set that even if the proton therapy turned out to be unsuccessful, I knew in my heart and mind that I'd made the best choice given there are no guarantees this side of eternity.

After therapy, my internist and I watched my PSA drop from the high of 6.1 to 3.1 to 2.4. Less than two years later my internist read 0.9 and she got a big hug!

While conventional wisdom says proton therapy does not improve BPH problems, mine has improved. Before treatment, I averaged three get-ups nightly. Now the number is two. Occasionally I get up three times and just as occasionally

It's a great blessing to know that God directed me to Loma Linda and I love to share my story with all.

The first of January I began my dream job. To say that at age sixty-five is a great blessing! Asian Aid was founded by two "Mother Teresa" types some forty years ago in Australia and now has an office in Collegedale, Tennessee. The non-profit sponsors more than 8,000 children in India, Bangladesh, Nepal and Sri Lanka. If not orphans, the children are the poorest of the poor whose opportunities are nil. We also support a leper colony and schools for the blind and hearing-impaired. Construction begins in Bobbili, India in March for a new orphanage that will house more than 200 precious children! Our mission is based on the words of Christ in Matthew 25 as we seek to serve "the least of these."

My first assignment was a life-changing trip to India and Nepal. In less than three weeks, I logged more than twenty-five thousand miles, sixteen legs on seven different airlines, about 1,000 miles of driving, while I visited ten of our institutions. Thank the Lord and Loma Linda for good health!

My mantra of thankfulness goes like this: "Everything works and I'm not wearing a diaper. God is good!"

Please check out www.asianaid.org and/or our Facebook page. Or email Dale.martin@asianaid.org for more information. Thank you! 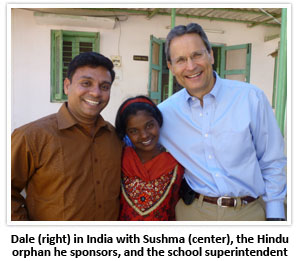 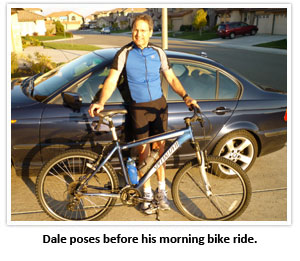