"Treating cancer shouldn't be this easy and this much fun."

"It's a darn short movie. How'd we ever get here?"

That James McMurtry lyric pretty much summed up my thoughts when I was diagnosed with prostate cancer. It's not like I wasn't expecting to get PCa. My brother had been diagnosed several years earlier. Still, when the probable turns into the definite ... well, it was a little earth-shattering. It's amazing how every little thing in your life that you used to think was important suddenly doesn't seem so anymore.

I never questioned the course of treatment I would undertake, however. I had visited Loma Linda on two separate occasions to visit friends who were proton patients and saw first-hand the unbelievable care each of them received. One of them immediately sent me Bob Marckini's book when I told him of my diagnosis. Reading Bob's book confirmed my decision. When my wife and I discovered that my health insurance considered Loma Linda to be an in-network provider, we began preparing ourselves for our new adventure.

And what a wonderful adventure it was!

I decided if we were going to spend nine weeks somewhere then we were darned well going to enjoy ourselves. We took advantage of everything Loma Linda and the proton radiation department staff had to offer. The most fun we had was the time we spent with fellow patients and their wives, who also decided they were going to have an enjoyable nine weeks. It was never dull in the waiting room during my nine weeks of treatment. I never dreamed I would have so much fun while being treated for cancer. I almost felt guilty. Almost.

I don't believe that could happen anywhere but at Loma Linda, where patient interaction is nurtured and encouraged. Loma Linda truly is a magical place. I am far from a deeply religious person, but I couldn't help but believe, as my friend Lynn Martell, who is Loma Linda University Health's director of patient services, says, "no one comes to Loma Linda by accident."

The entire city of Loma Linda seemingly supports the proton program and its patients. Short-term housing is plentiful. We found a house that had been divided into two separate units. Our half was wonderfully furnished with a master suite, living room, dining room, full kitchen, hi-def DirecTV, wi-fi, laundry room and garage and was located exactly one mile from both the hospital and the Drayson Center. All we had to bring were our clothes and toiletries. I often walked to both my treatments and to the gym.

We became friends with so many of the Loma Linda staff, especially the radiation department receptionists and the techs who treated me every day. We still see them twice a year when I return for check-ups, at which times I say I'm ready for my 46th treatment, which consists of hugs from each of them. They are dedicated professionals and are loaded with compassion

My wife and I have been fortunate to travel to some wonderful and exotic destinations in our 30 years together, but the time we spent at Loma Linda ranks near the top. As Bob Marckini says, it truly was a "radiation vacation." In summation, you can be treated by proton beam therapy for prostate cancer at a growing number of places, but there is only one Loma Linda.

And, oh yes. I'm totally satisfied with my PSA numbers and my quality of life post-treatment. Treating cancer shouldn't be this easy and this much fun.

Last PSA (March) was 0.7 (and dropping). I’m feeling great and I’m still convinced that having my prostate cancer treated by proton at Loma Linda was one of the best decisions I have ever made (other than asking my wife, Phyllis, to marry me).

Here is a photo of Charlie with his wife, Phyllis, and their daughter and son-in-law at Stingray City in Antigua. The photo was taken ten months after Charlie's proton treatment. 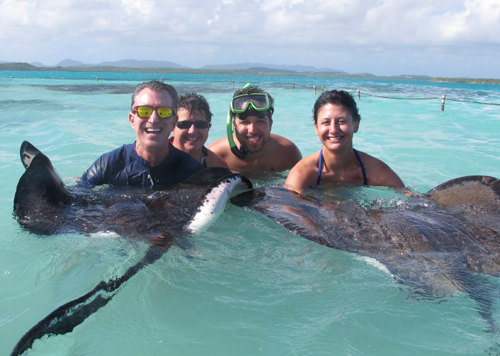