Picture this: You are 87 years old; you are healthy and active; you are diagnosed with prostate cancer; and you are an engineer. What do you do? Watchful waiting? Not Charlie Einsiedler. Today, Charlie is doing just fine. In fact, he just turned 102!

I routinely had annual DRE'S and PSA'S, all uneventful until mid June of 1999 when a reading of 5.9 occurred. But the biopsy found no cancer and the urologist, who had performed the procedure, shook my hand and said, "you have dodged the bullet." In my ignorance, I went happily on my way. Only later, and to my deep regret, did I learn 5.9 was a highly suspicious number meriting close follow-ups and worthy of more than a 4-sample biopsy.

A year later, my PSA had rocketed to 20.9 " Rather dramatic" said my primary care doctor and very scary to me. Even before the biopsy could be performed, I scurried to the Internet for pertinent information, as did all my children. As a result of their help, I gained a rather considerable dossier on prostate cancer and its treatment, and became somewhat prepared to discuss options after officially receiving what inevitably would be bad news. In a one sentence summary, the urologist rattled through my options: surgery, radiation, seeds, cryoblation, and hormones . My job, he said, is to "get you ten years. Hormone treatment is best for you. This is what we call chemical castration. I had a patient who refused treatment, and a year later he had cancer from head to toe. I can give you a shot right away, here in the office." No mention was made of likely long-term side effects of hormones, or that they could never, ever, be a cure, only a suppressant, or that ultimately they would probably mutate into a deadly and hormone resistance type. His recommendation could well have been influenced by my advancing age of 87.

No Way - I'm Doing My Homework

I declined the hard sell of an immediate injection saying I wanted to first study all options and to discuss them with my primary care doctor. The uro stalked from the interview room, just saying I should make an appointment for another visit. This I did not do, as this urologist's handling of my original 5.9 PSA was grossly flawed and I had now lost probable early discovery of prostate cancer as well as a year of valuable treatment time.

My primary care guy was great. He said I should make a decision with which I was fully and totally comfortable, and that hormones might not be a bad idea as they could be a sort of "freeze frame" approach while other modalities were studied. In my case he indicated that 3D conformal radiation might be my best choice .

The next stop was for a consultation at Lahey Clinic, outside Boston, where my wife and I had been very impressed by the results of her successful but highly sensitive back operation. We got another great guy in the urology dept., and had a long and wide ranging discussion. He, too, agreed that, in my case, the "freeze frame" approach, was a good idea and so, on the spot, we got a one-month's injection of Zoladex. The game plan that evolved was to come back in a month for a final consultation, monitor the initial impact of the Zoladex shot, and also, in the interim, to pursue a preparatory examination for radiation treatment.

Finding My Way to Proton and Loma Linda

The intervening month turned out to be one of the most decisive ones of my life. I am a regular reader of the N.Y. Times, and in the issue of Tuesday, October 3, 2000, in the Science Section, was an interesting article about seven men with prostate cancer, their PSA's, and the various treatments they ultimately chose. One of them, a doctor from Hot Springs, Arkansas, had learned about the precision of the proton beam approach, and elected to go to Loma Linda University Cancer Center for this "sophisticated form of therapy." So we telephoned LLUCC and asked for information. They promptly and willingly sent us various pieces of pertinent material .

When we saw the Bragg curves, and the theories behind this treatment concept, we started to feel that maybe this was the way to go. And just the newly discovered magic word "PROTON" sent us scurrying back to the Internet to open new doors. We learned that MIT, Harvard and Massachusetts General Hospital, working jointly, had successfully been using, for many years, proton beam therapy on a clinical basis for treating prostate and other cancers. And that they were nearing completion of a large, new facility specifically for this purpose. But when we called them for availability, they said there weren't yet ready, and, "Why don't you go to Loma Linda?"

All his new information was both reassuring and very convincing , and barring uncovering negative information along the way, I now felt that LLUCC was the way to go.

A month had now passed and it was time to go back to the Lahey Clinic for the second consultation, another PSA test, a DRE, and a three-months shot of Zoladex. I worried a bit about how my urologist at Lahey might feel since they are an outstanding institution of worldwide reputation, and do the whole bit, including surgery, seeds, radiation, etc. But he did not, for one second try to discourage or dissuade me from my pending decision. And for that he has my utmost respect.

I did what my primary care doctor originally recommended. I made a decision with which I was completely comfortable. Today, a little over a year after completing treatment and now with PSA of 0.2, I am even more comfortable with that original decision. And I feel so thankful to my wife and children for their full, unwavering, and constant support throughout this lengthy process. I feel I'm a very lucky guy.

EPILOGUE: A few weeks ago, we came back to California to see our grandson pitch his last college baseball game, which happened to be against Redlands University (in the town right next to Loma Linda). We left Rhode Island early Tuesday for a Friday game. Some friends and neighbors wondered why we left so early. Simply put, it was to savour, enjoy and relive the wonderful attitude and spirit that is LLUCC. We visited with my nurse, a truly wonderful, thoughtful and caring person, and we had a nice chat with my doctor (all this without any formal appointment or planning). We went to the regular Wednesday Night Meeting with many of the current proton patients and a few other "alumni." And we heard a very interesting and instructive talk from one of the LLUCC doctors concerning advances being made using proton treatment for other types of cancer. The next night, along with Gerry, we had supper with many of the proton patients.

The next day, who showed up at the ball game.

BOB founder Bob Marckini spoke with Charlie and Betty last month on his 99th birthday, almost 12 years since Charlie's treatment. They are both doing extremely well and are happy to be living near their three children in Maine. Charlie continues working on an idea he has for revolutionizing the combustion engine, and his design is coming along well, he reports.

"As soon as I get my eyesight problem fixed," Charlie told Bob, "I hope to be driving again and playing some golf."

So, here's a guy who had limited life-expectancy as a child. Today at age ninety-nine—12 years after prostate cancer treatment—Charlie is redesigning the combustion engine and looking forward to playing golf and driving again. It must be the protons!

Here is a photo of Charlie: 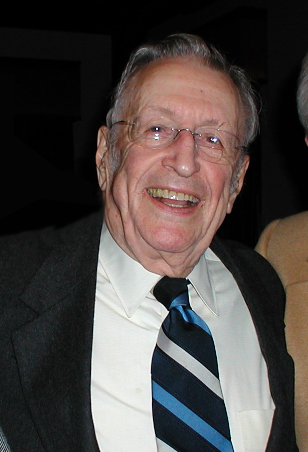 Charlie is turning 102 on September 27th. He is living in Maine in an assisted living facility with his wife, Betty. They wanted to be near their two sons who are approaching 70 years old, and their daughter who lives in Vermont.

When Charlie was diagnosed with prostate cancer at age 87, his doctors tried to discourage him from having any treatment, believing he didn’t have that many more years to live. “We’ll just give you some hormones,” they said, “and if you’re lucky, maybe you’ll get another eight or 10 years.” “Nothing doing,” Charlie said. He chose proton therapy at Loma Linda Cancer Center, and 15 years later, he’s still going strong, feeling good, and enjoying life to the fullest.

How does a 102-year-old spend his time? “I do a lot of walking and a lot of reading,” Charlie told us. “I love the monthly BOB Tales newsletter. I look forward to it with great anticipation every month and read it cover to cover as soon as it arrives.” Charlie also continues working on his pet project, a redesign of the internal combustion engine. An engineer by education, he is “greatly troubled” by the 70 percent energy loss with today’s designs. “I have many ideas for recovering that lost energy,” he says.