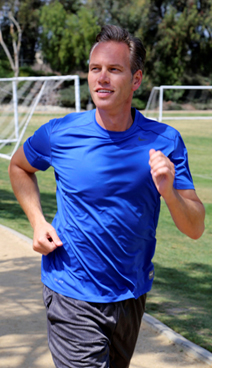 When I was diagnosed with prostate cancer on February 9, 2014, I was shocked. I didn’t have any symptoms; I was in great shape; and all of a sudden, there was this blood test that said I had cancer.

I didn’t know what to think. I was just 45-years-old, a senior design manager, an active athlete; I was in the prime of my life.

Treatment Options: Consider the Side Effects.

My urologist encouraged me to have surgery, so I scheduled the operation and hoped for the best.

I realized later that newly diagnosed men need to consider the side effects of the treatment options. Each modality seems to have similar cure rates—but what about the side effects? Ask your urologist: “If you had prostate cancer, what would you do?” And make sure he looks you in the eye when he answers! I would guess mine would have reconsidered the surgery suggestion.

After scheduling my surgery, I sent an email to several friends, telling them about my diagnosis and asking them to pray for me. All were encouraging, but two of them were especially supportive. The first was my girlfriend, Laura. She told me we would get through this together. Ironically, Laura’s father was diagnosed with prostate cancer two weeks later. The two of us suddenly had a lot to talk about. The second was a friend of mine. His father had gone to Loma Linda University Cancer Center for proton therapy 14 years ago and he was doing well. He sent me a link to the LLUCC website and suggested I watch some of their video testimonials. I was optimistic.

Proton Treatment: I never once felt isolated or lonely.

Three days after learning about proton therapy and LLUCC, I bought a plane ticket to California. After my consult, I made up my mind. I canceled my surgery appointment.

During my proton treatment, everyone was so helpful. That whole "make man whole" mission LLUCC talks about is absolutely true. In order to make patients feel at home—many of whom have traveled long distances to be treated—Dr. Lynn Martell, D.Min., director of special services, hosts a variety of activities, tours, and support groups. The programs create a spirit of camaraderie and esprit de corps. Despite the fact that I did not know anyone in Loma Linda prior to my treatment, I never once felt isolated or lonely.

I worked out every day during my treatment at LLUCC's Drayson Fitness Center (free for all patients). I also worked full-time (remotely). In between taking advantage of the gym facility, all of the patient activities, and working, I also enjoyed time with my girlfriend. She flew out to meet me for 10 days during the sixth week of my 10-week treatment program.

After Treatment: I’ve had no side effects—I feel great!

Two days after my treatment ended on May 14, I turned 46. Four months after that, my doctor ordered a PSA test to see if the proton therapy was effective. I was hoping my PSA might have dropped 30 to 50 percent. But it was even better than that!

Today, I feel great. I ate well before treatment; I eat better now. I was in shape before treatment; I’m in better shape now. I’ve had no side effects! Life is good! If I’m not at the gym, I’m with my beautiful girlfriend. We have a great group of friends. We go to the beach and go boating in the summer. In the winter, I snow board. We also take plenty of vacations.

Have your PSA checked and monitored as early as 40, in my opinion. You will have a base line to watch. Hopefully, it will never change. Luckily, my doctor checked mine at 43. If I had waited until 50, I believe I’d have a very different story to tell, if any at all.

I volunteer as a reference on LLUCC’s and the BOB’s former proton patient reference list. I also volunteer with the Immerman Angels One-on-One Cancer Support Group. A lot of guys come to me in their mid-40s and early 50s. I enjoy helping them find their way to proton therapy.

Below is a photo of Charles and his girlfriend, Laura, celebrating his latest PSA reading! 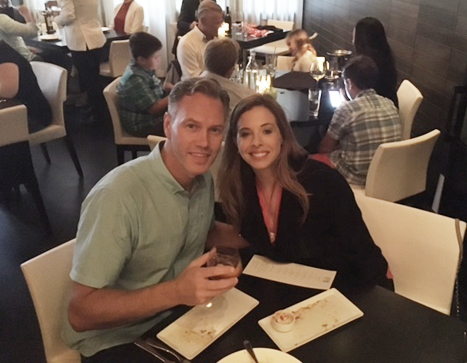 Charles shared this month, "It's hard to believe I was 45; had 45 treatments; and 45 balloons almost 45 months ago... I just wanted to share with you how well I'm doing and reassure others that proton therapy works! And I've had NO NO NO side effects!"

Today, Charles says “life is good.” He’s a global senior design manager and still with his girlfriend, Laura. He loves sports cars, snowboarding, and spending time with friends. Charles also loves traveling. “In 2018, Laura surprised me with a trip to Tahiti to celebrate my 50th,” he told us. The two have also recently traveled to Mexico, France, and the UK and are planning a trip to Alaska.

Charles still talks to the friends he made during his treatment and volunteers to be a reference on our “Young Men” list. “I’m living the life after protons,” Charles says.

It’s been seven years since Charles was treated with proton therapy at Loma Linda University Cancer Center. He's marrying his girlfriend, Laura, in February 2021, and his PSA remains low. "Life is GREAT! I’m thankful to Loma Linda and protons!”