"The doctor told me, "Your PSA is 7.15 … your Gleason score is 8. I recommend surgery; that's the gold standard. I chose proton instead and I'm doing great ... Having started 2004 with a cancer diagnosis, little did I know that it would turn into perhaps the best year of my life."

When I walked into the doctor’s office in January 2004, I was feeling good. My spirits were high; I seemed to be in perfect health, and I had made a break from corporate management two years earlier, leaving my job as Executive VP and General Manager of five Madison radio stations to become my own boss. Life was good!

My doctor said, “Your PSA is 7.15. I’m referring you to a urologist.” After performing a biopsy, the urologist told me, “You have prostate cancer and it appears to be at an aggressive stage. Your Gleason score is 8. I recommend surgery; that’s the gold standard.” Then he described the procedure and briefly explained some other options, which did not include any mention of protons. He told me to think it over and not take too long to decide. I set out to learn as much as I could about the disease and what alternatives to surgery existed. Within ten days, with the help of many web sites and several books, I educated myself about prostate cancer and various forms of treatment.

Upon searching more, I learned about proton treatment at Loma Linda University Cancer Center in California. After visiting the BOB website, communicating with former patients, and reading former patient testimonials, I called LLUCC.

Within a couple of days, I had scheduled a preliminary visit to LLUCC for a pelvic MRI and a meeting with the doctor. As soon as I had this confirmed, I logged on to the Internet and booked a round-trip flight to Ontario, California, the major airport nearest Loma Linda. As I clicked “purchase ticket” and hit the enter key on my keyboard, I looked up at the small, slightly faded photo that hung on my office wall. It was me, at age nine, posing with my arm around a great dane who was taller than I was. My mother had taken the picture while we were on a vacation trip in New England. Years later, I placed the photo into an imitation gold frame and added the inscription: “Don’t Fear the Big Dogs” ~ Billy Vancil, Age 9.

Exactly one year after beginning treatment, I returned to Loma Linda for a month long visit, now sporting a PSA of less than 0.05 and a newly published book, “Don’t Fear the Big Dogs”. Having started 2004 with a cancer diagnosis, little did I know that it would turn into perhaps the best year of my life.

For me, the choice was proton radiation at LLUCC. More than a decade has passed since my treatment, my PSA continues to register <.05 (less than point-zero-five). I feel blessed to have discovered LLUCC and proud to have served for ten years on its International Advisory Council along with Bob Marckini and the others devoted to contributing in whatever ways we can to helping further develop proton treatment through research and education.

I am always available to discuss my experiences with anyone at any time. E-mail me at billvancil@gmail.com or call me at 608-770-9098. 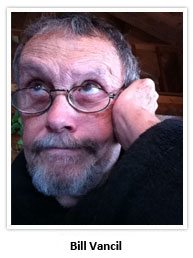