"Two thirds of the way through my nine week [proton] treatment, I had so much confidence in the future that I booked myself on a 14-day tour of Argentina and the Antarctic."

In April 2010, at the age of 71, I was told I had prostate cancer. My knee jerk reaction was to tell the urologist I wanted surgery to get rid of it. But I immediately began researching prostate cancer on the Internet. It didn't take long to learn that following prostate surgery, there is a very good chance the patient will suffer some level of incontinence and some level of impotence. By some level I mean, those conditions might be temporary or they might be permanent

A ray of hope appeared in the form of a book by Robert Marckini titled You Can Beat Prostate Cancer and You Don't Need Surgery to Do It. Let me tell you something; when a man learns of the potential for those bad side effects from surgery and then reads a title like that, it will get his attention. That was my introduction to proton beam radiation therapy (PBRT). The book was also the reason I changed my mind from surgery to PBRT.

My treatment began in December of 2010 at Loma Linda University Medical Center when my PSA was 7.0. and my Gleason score was 3+3. My final radiation treatment was February 9, 2011. I was told that if the treatment was a success, I could expect my PSA to be cut in half by my first follow up exam four months later. It should be about 3.5 by then. It was better than that; my PSA was 1.4. In September of 2012, a follow-up exam indicated my PSA was 0.49.

At no time during or since my treatment did I have any discomfort or bad side effects. In fact, two thirds of the way through my nine week treatment, I had so much confidence in the future that I booked myself on a 14-day tour of Argentina and the Antarctic. That confidence was not misplaced. I still feel wonderful today. The Antarctic trip was terrific. I now have the bragging rights of having set foot on all seven continents on earth.

Today at 73 I continue to enjoy travel. I recently returned from a trip to Singapore with a side trip to Siem Reap, Cambodia where I help support an elementary school. As I write this I am looking forward to a tour of Myanmar (formerly Burma) in three months. Two months later I will take a boat cruise on the Danube River from Budapest, Hungary to the Black Sea; passing through Hungary, Croatia, Serbia, Bulgaria and Romania. It is my intention that the river cruise will not be the end of my travels.

Life is good; in part because of my experience in overcoming prostate cancer. Yes, I consider myself a prostate cancer survivor. I would be glad to share my PBRT experience with anyone at any time: skyforb@comcast.net.

I’m always anxious to talk to people who are considering proton treatment. After all, it was Bob Marckini's experience and his book that made the decision to have proton treatment easy for me. I will forever be grateful.

Below is a photo of Bill during one of his many trips. This photo was taken at Neko Harbor on the Antarctic Peninsula on Andvord Bay. 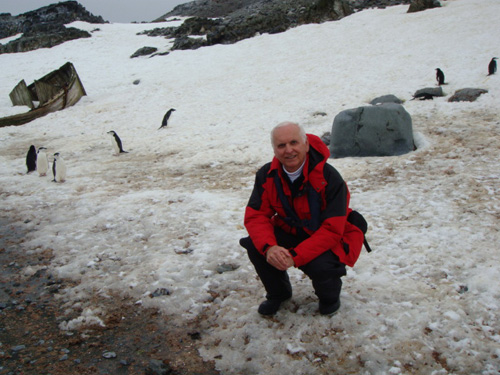