"As Seventh-day Adventists it was truly affirming for us to hear the 'graduation speeches' of fellow [proton] patients telling of the blessings they had received by being at Loma Linda [for treatment]. It was truly a fabulous 'radiation vacation!'"

For over forty years I worked for the Seventh-day Adventist Church. My work was primarily in the field of accounting and finance. I served in many places: California, Hawaii, Oregon, Singapore, Guam, Indiana, West Virginia, and Maryland. When I was working in Oregon I conducted an audit at the Adventist headquarters in Hawaii where Dr. Lynn Martell was President.  While there I filled out an employment application because I really wanted to live in Hawaii. A few years later the Secretary-Treasurer retired and Dr. Martell came to Oregon to interview me for the position. I got the job. About a year later, I moved to Hawaii and Dr. Martell took a job at Loma Linda University Cancer Center. A couple of years later, I accepted a job with the Adventist Church in Riverside, California and we moved to a house in Loma Linda. We renewed our friendship with Dr. Martell and his wife, Karen, and joined the same church in Calimesa where they were members.

The first Christmas after we moved to California, Lynn and Karen asked us to join them for Christmas dinner. We later learned they also invited all of the current proton patients at LLUCC. We sat at a card table with another couple in one of the bedrooms (!). They told us about the gentleman from whom they had purchased their home in Connecticut who had prostate cancer. They felt he should come to Loma Linda for treatment, but he couldn't afford to rent an apartment in the area. We told him that we were considering renting out a room in our home for proton patients, and would probably only charge around $75.00 a week. We gave our new friends our name and phone number and didn't really think much more about it. A couple of months later I got a call from our friend and he asked me if we were still willing to rent a room in our house to his friend.  We assured him we were willing and soon thereafter his friend joined us in Loma Linda.

That was the beginning of our association with the proton center at Loma Linda. For several years we had the wonderful privilege of having many proton patients stay in our home. We formed lasting friendships with them. When my wife, Marleen, and I retired a few years later, we sold our home in Loma Linda and moved to a mobile home in Highland; about ten miles from LLUCC. We did not renew our affiliation with the proton department, as we intended to do a lot of traveling and spend our summers in Oregon.

In 2015, I was diagnosed with prostate cancer, Gleason 8. My doctor advised treatment and started Lupron shots. Since we were living only ten miles from LLUCC, there was no question about where I would received treatment. I had already read Robert Marckini's book, You Can Beat Prostate Cancer, and still received regular reports from our "proton friends" about their successful recoveries. During my treatments, Marleen and I went to the Drayson Center several times a week, and attended all the proton activities; Tuesday night potlucks, Wednesday night lectures, and Thursday night restaurant tours. My wife made friends with other wives, and several times they went to special meals at my wife's favorite restaurants. As Seventh-day Adventists it was truly affirming for us to hear the "graduation speeches" of fellow patients telling of the blessings they had received by being in Loma Linda.  It was truly a fabulous "radiation vacation!"

Since I was still taking Lupron injections the doctors did not recommend a PSA test immediately after proton treatment. But when I eventually did - it was 0.04!  Praise the Lord!  I have had some minor side effects from the Lupron , but have not suffered any ill-effects from the proton beam therapy. 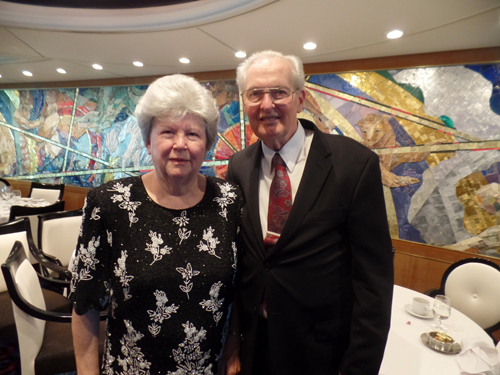 Arlind is doing great. This month he leaves for Blantyre, Malawi, at the request of Loma Linda University, to assist with the accounting records at the little Adventist Hospital there—he will be helping get their records in order so they can be audited. Arlind plans to return home on Valentine's Day.