Myth #7: There are no studies or documentation that support the success or superiority of proton therapy for prostate cancer.

We often hear from recently diagnosed men that their urologist is pressuring them to have surgery. When they bring up the subject of proton, they are often told some of the stories we have already addressed in Myths 1 through 6, such as “Proton therapy is ‘experimental’ or ‘investigational,’” or “it’s no better than advanced forms of conventional radiation.”  Another story they are often told is that there are no published studies, documentation, or articles on proton therapy for prostate cancer showing the benefits, or no statistics to back-up claims of proton’s superiority. This is not true.

Over the past 20+ years there have been dozens of studies and articles on this subject. A partial list is below.

What do these studies, surveys, and articles tell us? They tell us that:

Here is a sampling of some of the studies, articles, and surveys relating to proton therapy for prostate cancer:

The graph below titled, “Rectal Sparing,” shows considerably higher doses of radiation to the rectum with IMRT vs. proton. 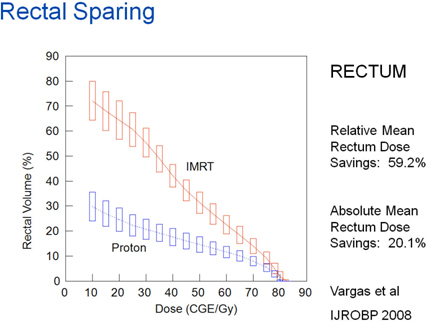 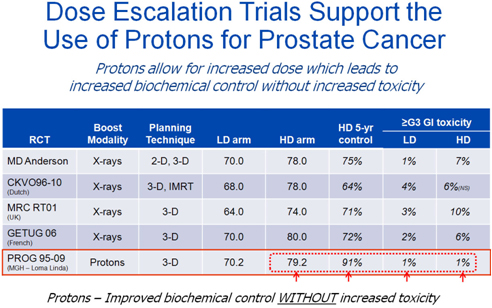 There are over 800 published peer reviewed journal articles and more than 30 active clinical trials evaluating the benefits of proton therapy. The following is a small sample of recent research supporting the value of proton therapy for diseases other than prostate cancer.

Proton therapy better preserves quality of life across all cancers compared with photon therapy. Cancer survivors are living longer due to effective treatments developed in the last few years. It is more important than ever to preserve quality of life for long-term survivors.

Proton therapy is the treatment of choice for base of skull cancers and chordomas, where sensitive brain and ocular structures prevent safe treatment with conventional radiation. Proton therapy has been shown to improve tumor control and overall survival for these cancers compared with photon therapy.

1) Zhou J, Yang B, Wang X, Jing Z. Comparison of the effectiveness of radiotherapy with photons and particles for chordoma after surgery: a meta-analysis. World Neurosurg. 2018;117:46-53.

Proton reduces side effects for pancreatic and gastrointestinal tumors compared with photon therapy.

Dr. James Cox, a prominent researcher from MD Anderson commented on this subject in an article in the Journal of Clinical Oncology. In the article he pointed out the fact that there is considerable documented evidence that with protons, there is two to three times less radiation deposited on healthy tissue, and radiation delivered to normal tissue causes damage to this tissue, and the severity of damage increases with increasing dose.

He states that, “We doubt that many of us, while healthy, would agree to receive, for example, 25 Gy to a large fraction of our brain or abdomen in exchange for some thousands of dollars, with no known or credibly hypothesized medical benefit. If we would not, how can we ask our sick patients to do so? Once proton beam therapy has become clinically available, is not the burden of proof on conventional x-ray therapy? Should not its advocates have to demonstrate that the cost savings achieved by using x-rays are not accompanied by undesirable additional morbidity? Do the users of x-ray therapy have the evidence to support such a claim?”