What Do They Really Cost?

It’s nearly impossible to pinpoint the cost of IMRT or proton therapy for treating prostate cancer. Why? Because reimbursement rates vary widely between individual private insurers, and between private insurers and Medicare; they also vary from region to region; and they vary between hospital-based and free-standing treatment centers.

In a presentation given by Andrew Lee, M.D., MPH, Associate Professor from MD Anderson Cancer Center at the annual American Society for Radiation Oncology (ASTRO) meeting last year, he reported the initial cost to treat prostate cancer protons is $8,000 higher than treating with IMRT. Dr. Steven Pearson and Dr. Peter Bach, formerly with the Centers for Medicare and Medicaid Services (CMS) confirm this difference.

So, the initial cost to treat with protons is approximately $8,000 higher than treating with IMRT. But what about total cost to private insurers and Medicare? What about follow-up costs and hospitalizations for treating higher levels of impotence, rectal issues, incontinence, and other side effects that are more prevalent with IMRT?

Our survey of BOB members showed no difference in urinary function or bowel function between men treated with protons and men who received no treatment at all. And while there were some changes in sexual function for a small fraction of respondents, most of this was connected with members on hormonal therapy, older members, and members with the most aggressive cancers. Our 2009 survey showed only 4% of members with impotence.

And what about the cost of diapers for incontinence, and over-the-counter medications for pain and discomfort resulting from the other treatments? These costs also add up over time.

How Do You Put a Cost On Quality of Life?

He further reported on a study (Chung et. al. ASTRO 2008) that showed that because less radiation is deposited on healthy tissue, the probability of secondary cancers with protons is less than half that of X-rays.

Therefore, the likelihood of urinary, rectal, sexual side effects, and secondary cancers is lower with proton.

In 2010, Medicare spent $1.06 billion on conventional (X-ray) radiation therapy. That same year, Medicare spent $41.8 million on proton therapy, or less than 4% of X-ray cost. Certainly there were far fewer patients treated with protons than with X-rays, but the numbers show that the bulk of Medicare money is being spent on X-ray radiation. All the while, significant advances are being with proton technology to improve cure rates, reduce side effects, and lower costs. 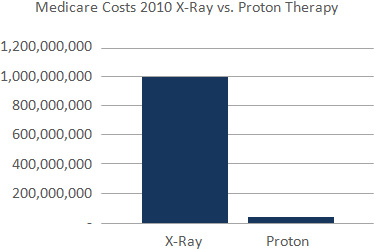 Cost is Coming Down

There are advances being made through proton hypo-fractionation clinical trials. Studies are underway at three U.S. proton centers where they are treating patients with higher daily doses and fewer fractions. Early results are extremely positive, and it is likely that within a few years this new, shortened treatment protocol will be adopted at all proton centers. This means the cost to treat with protons will likely drop to the same level as IMRT, and maybe even lower.

That’s how technology works. Through research and clinical trials, new treatment protocols are developed, cure rates are improved, treatment times are shortened, and costs are lowered. Much of this research has been funded through BOB member gifts.

Proton therapy is NOT significantly more expensive than IMRT. Initial cost to treat with protons today is a few thousand dollars higher. Even if proton therapy were twice the cost of IMRT, the long term (total) cost is probably comparable, and maybe even lower than IMRT. And, unquestionably, when shorter treatment protocols are adopted and other technology improvements are implemented, proton initial costs will be at the IMRT level, or lower. Add to that, higher quality of life with proton therapy and the cost argument disappears.

So, is proton therapy for prostate cancer significantly more expensive than IMRT? Absolutely not! Initial cost may be higher, but total cost is similar or maybe even lower. And, in the near future, even the initial cost will be comparable to IMRT.