Myth #1: Proton therapy is experimental and investigational. It is a new, untested science.

If the patient accepts this claim and chooses IMRT or some other form of treatment, then the insurance company wins and the patient loses. If patients fight the denial through the appeals process, and do it smartly, they almost always win. Some choose not to go through the appeals process because they are anxious about their diagnosis, and want to get treated sooner rather than later. So they accept defeat and choose another option. We call this “denial by delay” and it works well for many insurers.

So, where is truth? Is proton treatment new, experimental, or investigational? The answer is “no” on all counts.

Here are some facts: 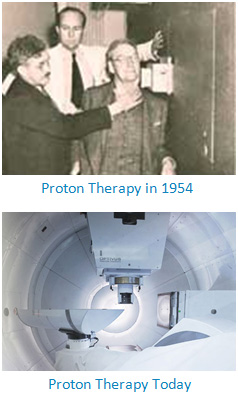 So, is proton therapy experimental and investigational? Hardly. Proton therapy has been around for almost 60 years; tens of thousands of patients have been treated—mostly prostate cancer patients; it is FDA approved, reimbursed by Medicare and 180 private insurers; and reputable medical centers all over the world have embraced the technology and are building proton centers. This does not sound like a technology that is experimental, investigational, or untested science.

As BOB member, Jim Landry, wrote in his Proton Pals newsletter recently, “When your insurance company says this treatment is experimental you can point out that it was experimental in 1954, show them the picture (on the right) from the Berkeley Radiation Laboratory and then tell them how many patients have been treated, a very high percentage of which were for prostate cancer.”