The following was written in response to a prospective patient’s request for information about Proton therapy. The individual specifically asked for feedback on any side effects experienced.

After several years of rising PSA, including two years of visiting a urologist because of rising PSA, a biopsy found a malignancy (July, 2000). My urologist said my numbers and age (61) combined with being in excellent physical condition made me an ideal candidate for surgery…which he would perform, of course. If I were uncomfortable with surgery he would assist one of the doctors of the Blasko group at Swedish Medical Center (across the street from his office) with seed implants. His said other treatments were much less attractive from his point of view.

I immediately began searching the Web for information about treatments and side effects and was fortunate in having a close friend (and my undergraduate chemistry professor), Andy Montana (also a BOB member) who had received Proton treatment for prostate cancer at Loma Linda. Andy learned about my diagnosis through a mutual friend and called (I was planning to give him a call for advice, but he beat me to the punch). He drove immediately the 35 miles through Seattle rush-hour traffic to bring me a foot-thick stack of information on prostate cancer treatment. Andy gave my wife and me a thorough account of how he learned about Loma Linda and the physics of proton beam behavior and the implications/advantages of charged particle radiation for treatment (we are both Ph.D. chemists and the Bragg Peak was well known to both of us). My wife and I concurred on the choice of Loma Linda on the spot (she had been present when my urologist described treatment options and knew about the problems her female colleagues' husbands who had either had surgery or seed treatment for prostate cancer were experiencing). My last PSA was 5.6 just prior to biopsy (a bit higher prior to treatment) and the Gleason score was 6…with no palpable tumor (T1c).

I received 38 proton treatments beginning on November 6 and ending on December 29, 2000. I experienced some urgency of urination during the first 2.5 weeks of treatment, ascribed to the reaction of the tissue to the radiation, but, after the long Thanksgiving weekend, that disappeared. I still wonder if the urgency was more psychological than real because whenever I was near a restroom there was no urgency. I like to climb mountains and made multiple trips to the San Bernardino mountains and San Gorgonio Wilderness area. I got stronger as my treatments proceeded, no doubt because I was getting so much wonderful exercise. I reached the summit of San Gorgonio on December 16th, the oldest person on the summit that day and the only one having just completed six weeks of radiation therapy. I had two double treatments (same day with at least 8 hours between treatments) in the last two weeks and, though some said they experienced fatigue after double treatments, I noticed no difference.

There were two symptoms that I did notice during my treatment: "Lover's Groan" and tanning of the skin where the beam entered (left and right). Lover's Groan occurs during ejaculation and was the only obvious evidence that the proton beam was on during treatment until the tanning showed up in the last week of treatment. Lover's groan persisted for about four months post treatment and the tanning disappeared two or three weeks post treatment. I experienced no rectal bleeding and because I had a bleeding polyp removed via colonoscopy in 1998, I had my three-year follow up three months after completing proton therapy. Not only were there no new polyps, my gastroenterologist (who had done colonoscopy exams of other proton therapy treated patients) found my rectal tissues completely normal. I knew that the surface tissues can appear normal and then slough later on, but, two weeks short of three years from the end of my treatment, I have experienced no rectal bleeding.

I did experience spasms in the treated area…normal, I understand, but not noticed by the majority of patients. They are akin to mild gas pains and I experienced about a half dozen episodes (a day or two each) over the period from mid-treatment through the first year. I suspect many patients may experience these and not even notice. I also experienced periods of low libido over the first two years and although brief, the concern was that they would get worse. Things are completely normal over the past six months except, of course, that ejaculate is almost non-existent. Urination is great … no leakage and a stream equivalent to what I remember from my mid 30s. This is a really nice bonus from proton therapy…my father was twice reamed out with sphincter damage and his father died of complications from a botched ream-out.

It is often stated that cure rates from proton therapy are comparable to those from surgery. But that is only true when you compare results from the best urological surgeons and it does not take into account post surgical complications. Just having general surgery is accompanied by many well-documented side effects and even death…and these and other side effects, and required treatments are not included in the statistics. When you look at impotence, incontinence, etc., proton therapy is so much better. There simply is no comparison.

And then there is the Loma Linda experience. If there is a hospital that provides such a wonderful package of care I have yet to hear of it. The staff is simply remarkable and the patients that get past their urologist's need for surgical cash flow are a really special group. My two months on site provided a wonderful vacation and the friends I made during that time will last a lifetime. The choice, in my humble view, is a very simple one.

And, oh yes, a comment about diet. It is my understanding that about 10% of patients experience loose stools as a side effect of the radiation. I put myself on a low fat diet (Dean Ornish) three years before beginning treatment, a diet that allows me to avoid aortic valve replacement. I stayed on that diet with the concurrence of my Dr. (Jabola). If you already have intestinal problems it makes sense to stay with what works, but if you have no problem you can simply change your diet when the problem shows up…at least that is what I was told.

It was on the last working day of 2000 that I received my final treatment at Loma Linda, precisely eight years ago. I regularly talk with men who are making the decision on treatment for prostate cancer and it is a joy to pass along the message of proton therapy. Even though I ask those I counsel to let me know if they regret their decision to undergo treatment or if I have misrepresented the treatment, after encouraging many, many dozens of men, the only response is one of joy and deep thanks. Who would think that cancer survivors would consider that their diagnosis was a gift? But that is what proton therapy, Loma Linda, the wonderful support group, and the marvelous organization that Bob Marckini has put together for pre and post treatment support elicit.

My PSA has settled in the 0.5 plus or minus 0.1 range, my health is excellent, and my regular colonoscopies confirm that those balloons did their job! I live a normal, vigorous life, climbing and photographing in the nearby mountains once or twice each week during the spring, summer and fall and as often as avalanche conditions permit through the winter. And I continue to work more than full time as a commercial photographer specializing in architectural, aerial, and fine art subjects. I thank God for the wisdom, courage and resources that Loma Linda brought together to make proton therapy a safe, mainstream treatment in the most caring professional setting I have yet seen in a hospital.

In the photo below, Jerry was about to get on a gondola lift at Crystal Mountain, WA this past summer. His wife, Cindy, is on the far left. 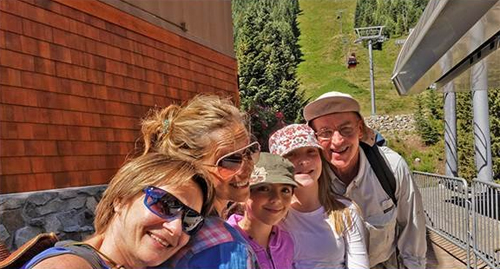